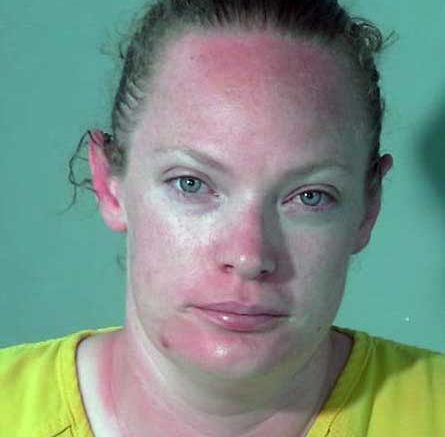 Contributed Photo/Courtesy GCSO: Amanda Johnson was booked into the Graham County Jail for unlawful use of means of transportation after allegedly stealing her boyfriend's mother's truck and driving to New Mexico.

GRAHAM COUNTY – The victims of a truck theft not only recovered the vehicle in New Mexico but brought the alleged thief back for incarceration as well.

Amanda Joyce Johnson, 27, of Safford was booked into the Graham County Jail on Monday for unlawful use of means of transportation.

Deputies were initially informed of the theft of a 2003, 1500 Dodge Ram pickup truck on July 30 after the reporting party informed them her son’s girlfriend, Johnson, had taken it during the late night or early morning. The owner believed Johnson was fleeing from a drug dealer she had crossed. According to court records, Johnson has a history involving a variety of illicit drugs.

The owner informed the deputy that Johnson had called her son the day before from a convenience store in New Mexico and said she had run out of gas.

The boyfriend told the deputy that his relationship with Johnson was strained and that she smashed a window on another vehicle and took the truck several days earlier. He said he resisted reporting the incidents because he didn’t want her to get into trouble.

On July 31 at about 11 p.m., a deputy was dispatched to call the victim, who reported having traveled to Deming, New Mexico with her son to up Johnson and the truck, which was supposedly broken down at a gas station. The victim said they were all headed back to Safford with the stolen truck.

Soon afterward, the deputy located Johnson in the stolen truck at the victim’s residence. Johnson allegedly admitted stealing the truck and was booked into the jail.