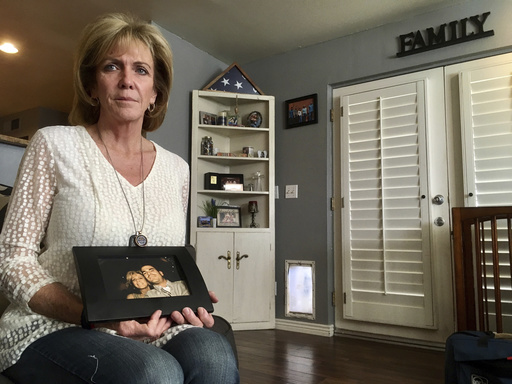 Mary Ann Mendoza poses for a photograph while holding a framed picture of herself and her son, Brandon Mendoza, on Thursday, March 2, 2017, at her home in Mesa, Ariz. Families who have lost loved ones to crimes committed by immigrants are praising President Donald Trump’s announcement this week that he will create a new office to advocate on their behalf. Mendoza's son, a Mesa police officer, was killed on May 12, 2014, in a head-on collision with a man who authorities say was intoxicated and an immigrant in the country illegally. Both Brandon Mendoza and the other diver were killed in the crash. (AP Photo/Brian Skoloff)

PHOENIX (AP) — Two years ago, Steve Ronnebeck’s son was gunned down at work in a Phoenix-area convenience store over a pack of cigarettes. The man accused of pulling the trigger was an immigrant who was in the country illegally and had been released by federal authorities.

The suspected killer, captured on camera calmly stepping over the body of 21-year-old Grant Ronnebeck to grab a few more packs, faced deportation but was free on bond.

Ronnebeck and other families who have lost loved ones to crimes committed by immigrants now have a forceful advocate at the highest level with President Donald Trump in the White House. During his speech to Congress on Tuesday, Trump announced that he would create a new office to serve victims of immigrant crime and their relatives.

Although immigrants are responsible for only a small fraction of the crimes committed daily around the country, the issue played an outsized role in the race for the White House. Trump repeatedly invoked such crimes at rallies and frequently appeared with victims on the campaign trail, pointing to case after case in which people were killed by immigrant assailants who slipped through the cracks.

Many of the families have doggedly pressed for changes in the immigration system for years, lobbying lawmakers in Washington and even disrupting congressional hearings to make their point.

“To lose a child, especially when it was preventable, you know there’s no coming back from that. You don’t ever recover, but to have a president that is putting Americans first and putting the victims’ families first, it’s amazing,” Ronnebeck said. “Finally we’re being heard. My family feels like we actually matter again.”

The man charged in Grant Ronnebeck’s slaying has pleaded not guilty to murder, armed robbery and other charges. Adolfo Altamirano is scheduled to go to trial Sept. 18 in Maricopa County.

Trump’s new agency will be the office of Victims of Immigration Crime Engagement, or VOICE, and will be part of the Department of Homeland Security. Department Secretary John Kelly described the agency’s planned work in a memo last month.

Under President Barack Obama, the Immigration and Customs Enforcement agency protected information about immigration cases from public inspection, including from victims. It also created a public advocate position in 2012 that helped immigrants facing deportation and answered complaints or offered explanations about the agency’s work.

Opponents criticized the administration for using government money to advocate for immigrants in the country illegally.

Don Rosenberg said an office like VOICE would have been useful when he was trying to navigate the judicial system after an immigrant named Roberto Galo killed his 25-year-old son, Drew, in a car collision after striking the law student’s motorcycle in San Francisco in late 2010.

Rosenberg struggled to keep track of hearings and did not know what his rights were as the father of a victim.

Galo did not have a driver’s license and was in the country illegally, although he had temporary protected status, meaning he was shielded from deportation. He was sentenced to six months in jail but was let out after 43 days, Rosenberg said.

He was eventually deported to Honduras.

Rosenberg became vocal against policies protecting immigrants. He was detained by U.S. Capitol police in July 2015 after getting into an argument with another man at a Senate Judiciary Committee hearing examining the Obama administration’s approach to immigration. Rosenberg said he got loud but not violent while arguing with a man. He was not charged.

Not all relatives of crime victims agree with Trump.

Andy Ostroy, of New York, said it’s wrong for the president and others to demonize a group of people based on the actions of a few.

Ostroy’s wife, Adrienne Shelly, was an actor and filmmaker with a young daughter. She was killed in 2006 by an Ecuadorean immigrant who was working in construction without legal status. Diego Pillco strangled Shelly and staged her death as a suicide. He confessed, pleaded guilty to manslaughter and was sentenced to 25 years in prison.

Ostroy said a program such as VOICE will fuel anti-immigrant rhetoric.

“Let’s just work on crime, period,” he said. “Let’s not go down a dark, dangerous path of demonizing whole segments of our population.”

Mary Ann Mendoza is the mother of a Mesa, Arizona, police sergeant killed in 2014 in a head-on collision with a drunken driver who was suspected of being in the country illegally. The driver, Raul Silva Corona, who had been driving the wrong way, was killed in the crash.

Mendoza said she has been working with members of the Trump administration as they create VOICE and is grateful for the president’s actions.

“So many times families are left grieving the loss of their loved ones, and they’re left wondering what happened in the system,” she said. “I wish we had leadership in our state that stood up for Americans and would reach out to our families.”