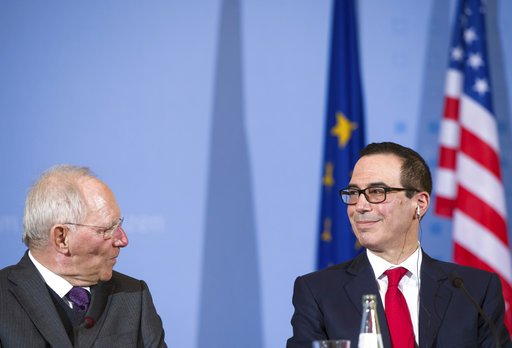 German Federal Finance Minister Wolfgang Schaeuble, left, and US Finance Minister, Steven Mnuchin interact during a joint press conference in Berlin, Germany, Thursday, March 16, 2017. The U.S. and German finance chiefs say they’re ready to cooperate and avoid “trade wars,” playing down in their first meeting the tensions that have grown globally over commerce since the new U.S. administration came to power. (Soeren Stache/dpa via AP)

BADEN-BADEN, Germany (AP) — Top finance officials including new U.S. Treasury Secretary Steven Mnuchin are debating what stance to take on free trade at a meeting that will help set the tone for the global economy.

The gathering of finance ministers and central bank heads from the Group of 20 countries has focused on shifting attitudes toward trade, particularly after U.S. President Donald Trump vowed to impose border taxes and rewrite free trade deals he says have shortchanged the U.S.

Mnuchin has said trade needs to be “fair,” which would be a step back from the group’s previous blanket condemnation of trade barriers.

Attention at the two-day meeting in the German spa town of Baden-Baden has centered on a joint statement that is being prepared for Saturday.

Early drafts have dropped an earlier ban on protectionism, but there was no agreement on what would replace it, said officials who briefed reporters Friday on condition of anonymity because the talks were ongoing.

The meeting’s host, German Finance Minister Wolfgang Schaeuble, told reporters that the discussion was about “the right formulation regarding the openness of the world economy.”

The last such gathering, in July 2016 in Chengdu, China, issued a strong statement in favor of free trade, saying “we will resist all forms of protectionism.” Possible replacements include support for “fairness.”

Angel Gurria, secretary-general of the Organization for Economic Cooperation and Development, downplayed differences over the exact language. The OECD is one of several international organizations invited to participate in the meeting.

Gurria told The Associated Press it was “important to create a comfort zone” where leaders could have their first discussions with the new administration, “to make them feel that this is a place where we can talk, we can ventilate the areas where we have common ground and the areas where we may have differences.”

European countries and others that depend on exports, such as China, were said to be pushing for a stronger statement in favor of trade with fewer tariffs and other barriers in a rule-based system.

The gathering will help set the tone for international commerce and finance and will give Mnuchin a chance to clarify what the U.S. position is.

The G-20 is an informal forum on economic cooperation made up of 19 countries with more than 80 percent of the world economy, plus the European Union. The finance ministers’ meeting will pave the way for a summit of national leaders in Hamburg, Germany, on July 7-8.

Trump has repeatedly emphasized that the U.S. needs a tougher approach to trade that would put American workers and companies first. He has already pulled the U.S. out of the proposed Trans-Pacific Partnership agreement with Japan and other Pacific Rim countries and he has started the process to renegotiate the North American Free Trade Agreement with Mexico and Canada, both of whom are G-20 members.

In a visit to Berlin ahead of the G-20 meeting, Mnuchin said the U.S. is interested in trade that is not only free but fair.

“Our objective is getting more balanced trade agreements,” he said, confirming that having border taxes is an option. He said, without providing specifics, that some U.S. trade agreements need to be re-examined, while adding that, “It is not our desire to get into trade wars.”

The G-20 meeting is taking place with the global economy in relatively good shape: the International Monetary Fund predicts growth of 3.4 percent this year and 3.6 percent next year, compared with 3.1 percent last year.

Yet the British vote last year to leave the European Union and Trump’s victory on an “America First” platform have underlined discontent with globalization, a sense among many that the benefits of a globalized economy — that is, with fewer barriers to trade and business — do not reach enough people.

Advocates for free trade such as the IMF say that trade restrictions will only hurt growth and won’t benefit ordinary people, while urging measures to spread the benefits of trade more widely. That could include job training and education, since the IMF says trade and globalization have benefited higher-skilled workers.