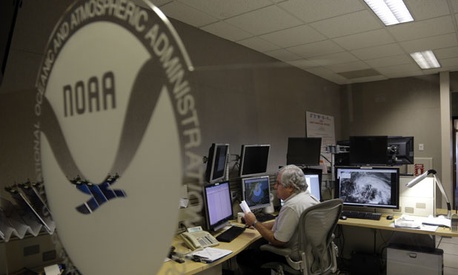 HONOLULU (AP) — An El Nino-related tropical storm has formed southwest of Hawaii, only the third such system to develop in January in over 40 years.

Tropical Storm Pali was about 1,400 miles southwest of Honolulu as of 11 a.m. Friday, the Central Pacific Hurricane Center said. It is not near land.

Pali is slowly moving west-northwest at 5 mph. It’s expected to weaken over the next three to five days, said Kevin Kodama, a hurricane forecaster with the center.

Warm ocean temperatures near the equator caused the storm to form, he said.

The last January tropical storm in the central Pacific Ocean was in 1992, when there was a significant El Nino, Kodama said. The other was in 1989.

El Nino is the natural warming of the central Pacific that interacts with the atmosphere and changes weather worldwide. It occurs every two to seven years or so.

Pali’s formation continues a pattern dating to 2014 of many storms forming in the central Pacific, said Jeff Masters, a former hurricane hunter meteorologist and meteorology director of the private Weather Underground.

That the year Tropical Storm Iselle hit the Big Island and two other hurricanes came within 200 miles of the islands. Then last year, eight named storms formed in the central Pacific. That broke the previous record of four set in 1982.

The current El Nino has tied 1997-1998 as the strongest on record, the National Oceanic and Atmospheric Administration’s Climate Prediction Center said, citing statistics that go back to 1950.

El Nino is closely associated with heavy rain in California, and general warming. It has less of an effect farther away in Europe. With its flipside, La Nina, it is known as the El Nino Southern Oscillation, and it lasts about a year.

In the Atlantic, a low pressure system north of Bermuda is producing gale-force winds. The National Hurricane Center in Miami said there’s a 10 percent chance it will form a tropical storm in the next two days.