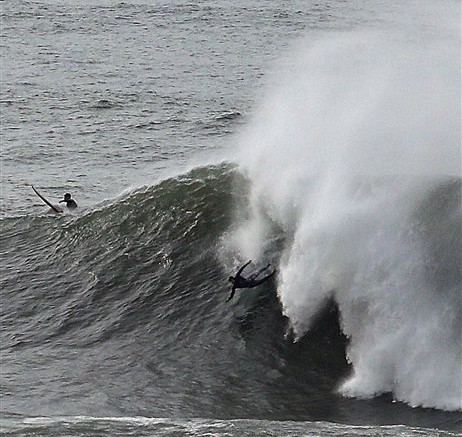 A surfer wipes out under a large wave Friday, Jan. 8, 2016, at Mavericks in Half Moon Bay, Calif. (AP Photo/Ben Margot)

The San Francisco Chronicle reports (sfg.ly/1ZaqB9f) the waves on Thursday drew professional big-wave surfers from around the world.

But conditions were too chaotic for an annual surfing competition for top riders. The Titans of Mavericks was postponed but could be held later this season, depending on conditions.

The window for the exclusive, one-day contest closes March 31.

The Mavericks surf spot near the San Francisco Bay Area city of Half Moon Bay is known for treacherous conditions. The Chronicle reports waves at the break can easily top 60 feet, and they pound the underwater reef with such force they can be recorded by seismographs.