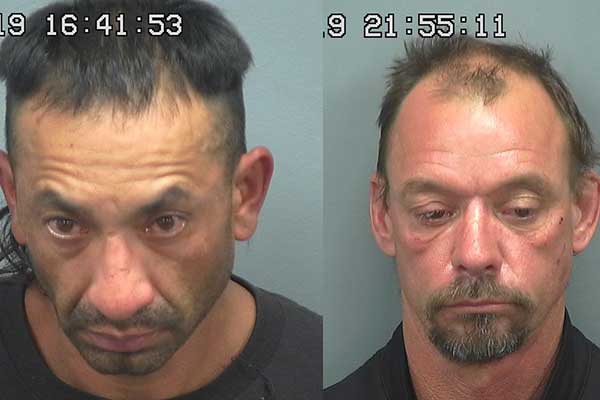 On the morning of Friday, November 1, a Safford detective traveling westbound on Highway 70 in the Pima area noticed a man he knew from previous contacts walking eastbound on the highway. The detective ran a records’ check for the man, identified as Thomas Reynolds, and found that he had a warrant for his arrest.

The detective turned around but could no longer see Reynolds on the road. He turned down a side street and found Reynolds sitting by a four-wheeler. There was another man sitting on the four-wheeler. As the detective pulled up, both men began walking toward him. The detective was driving an unmarked truck, but he was in full uniform. He notified dispatch of his location and told them he was with two subjects. The detective opened his door as one of the men, later identified as Nicholas Alvarado, began to come around to the detective’s open door with his hand in his pocket. The detective told Alvarado to get out of the road and stand in front of his patrol vehicle. As Alvarado turned around the detective saw that he had a large machete tucked in the lower back of his pants.

The detective kept both men at gunpoint until other officers arrived to assist. He told them to put their hands on the hood of his patrol vehicle where he could see them. A metal container fell from Alvarado’s pocket. He looked down at it but the detective told him not to pick it up.

A Pima police officer arrived on the scene and placed both men in handcuffs. The officer picked up the metal Mentos container from the ground and found two plastic baggies with one containing approximately 1 gram of methamphetamine. Alvarado said that he had found it on the ground by the four-wheeler.

Alvarado said that he had used meth about a week prior and said that he had a meth pipe in his left front pocket. He claimed that Reynolds had given it to him along with the metal container when the detective pulled up. He tried to tell the detective that he didn’t know what the items were, even though he had previously admitted using meth. The detective told him that he believed Alvarado was trying to get rid of the items when he arrived, but Alvarado denied the accusation and claimed that the metal container just fell out of his pocket.

The detective asked him at what point he put Reynolds pipe in his pocket. Alvarado said that it was at the same time. The detective challenged this version of his story and asked him why he had originally said that he found the container on the ground. Alvarado would not answer the question but stated that the detective scared him.

Reynolds refused to talk to the detective. He said that he wanted a lawyer. The Pima police officer searched Reynolds and found a working taser.

Another officer examined the four-wheeler and found that the ignition was missing, and the vehicle had been painted black. The paint job was sloppy and the person who painted it had painted over parts instead of removing them and painting parts individually. The VIN of the vehicle had also been painted over, making it difficult to read the VIN. The four-wheeler was identified as a Yamaha Raptor.

Alvarado and Reynolds were booked into the Graham County Jail on drug and weapons offenses, and the four-wheeler was impounded. The VIN appeared to have been tampered with and altered, making it difficult to determine the number. Authorities are trying to determine who owns it.