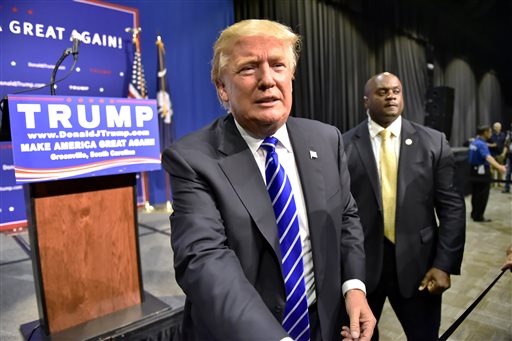 FILE - In this Aug. 27, 2015 file photo, Republican presidential candidate Donald Trump greets supporters after speaking at a rally at the TD Convention Center in Greenville, S.C. NBC announced Tuesday, Sept. 1, that Trump will sit down with host Jimmy Fallon to discuss his campaign and other issues on "The Tonight Show Starring Jimmy Fallon," on Sept. 11. (AP Photo/Richard Shiro, File)

Not to his old show, “The Celebrity Apprentice,” but to “The Tonight Show,” where he’ll be a guest on Sept. 11.

Currently leading the Republican field in the 2016 presidential race, Trump will sit down with host Jimmy Fallon to discuss his campaign and other issues, NBC announced Tuesday. Terrence Howard and Pharrell Williams will also be guests that night.

Other scheduled guests next week (countering premiere week for CBS’ “The Late Show With Stephen Colbert”) are: