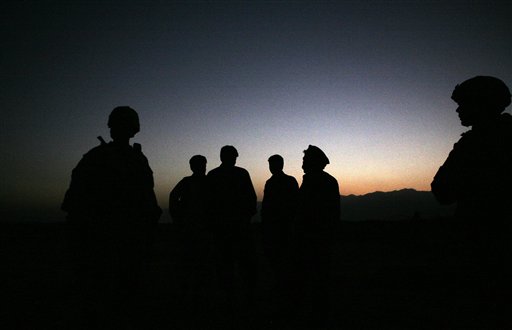 FILE - In this Sunday, Oct. 18, 2009 file photo, U.S. Army soldiers stand with Afghan policemen before a joint patrol of Qalanderkhail, outside of Bagram Air Field in Afghanistan. An Afghan official says that a suicide bomber has killed three foreign troops in an attack on a joint Afghan-NATO foot patrol on Monday, Dec. 21, 2015. Mohammad Asim Asim, governor of Parwan province said an attacker on a motorcycle rammed a group of eight troops as they patrolled a village near Bagram Airfield, 45 kilometers (28 miles) north of Kabul. (AP Photo/Maya Alleruzzo, File)

The soldiers were targeted as they moved through a village near Bagram Airfield, the largest U.S. military facility in Afghanistan, NATO and Afghan officials said. The Taliban claimed responsibility.

A U.S. official confirmed that six American troops were killed and two wounded. An Afghan was also wounded. The official was not authorized to discuss the incident publicly so spoke on condition of anonymity.

“Our heartfelt sympathies go out to the families and friends of those affected in this tragic incident, especially during this holiday season,” U.S. Army Brig. Gen. William Shoffner, head of public affairs at NATO’s Resolute Support base in the Afghan capital Kabul, said in a statement.

In New York, Police Commissioner William Bratton said Monday that a New York City police detective, Joseph Lemm, was one of the six American killed in the attack.

Lemm was a 15-year-old veteran of the New York Police Department and worked in the Bronx Warrant Squad. Bratton says Lemm served in the U.S. National Guard and, while a member of the police force, he had been deployed twice to Afghanistan and once to Iraq. He leaves behind a wife and three children.

In Washington, White House press secretary Josh Earnest said the nation’s thoughts and prayers are with the victims, their families and their loved ones, and that the U.S. will continue to work jointly with Afghans to promote peace and stability in their country.

Secretary of Defense Ash Carter in statement called the attack “a painful reminder of the dangers our troopsface every day in Afghanistan.”

It was the deadliest attack on foreign troops in four months. On Aug. 22, three American contractors with the RS base were killed in a suicide attack in Kabul. On Aug. 7 and 8, Kabul was the scene of three insurgent attacks within 24 hours that left at least 35 people dead. One of the attacks, on a U.S. special operations forces base outside Kabul, killed one U.S soldier and eight Afghan civilian contractors.

In the year since the international drawdown, the Taliban insurgency has intensified. Although the combat mission ended last year, around 9,800 U.S. troops and almost 4,000 NATO forces remain in Afghanistan. They have a mandate to “train, assist and advise” their Afghan counterparts, who are now effectively fighting a battle-hardened Taliban alone.

Monday’s attack came as Taliban fighters and government forces battled for control of a strategic district in the southern province of Helmand after it was overrun by insurgents, delivering a serious blow to the government’s thinly spread and exhausted forces.

Rasulyar had taken the unusual step of alerting Afghan President Ashraf Ghani to the dire security situation and requesting urgent reinforcements through an open letter posted on Facebook on Sunday, saying that he had not been able to make contact through other means.

“We had to take to social media to reach you as Helmand is falling into the hands of the enemy and it requires your immediate attention,” Rasulyar wrote in his Facebook post to Ghani.

On Monday, Defense Ministry spokesman Dawlat Waziri said Afghan Army commandoes and special forces had arrived in Sangin to push a counter-offensive. He told reporters the Afghan air force had conducted 160 combat and transport flights over Sangin in the past 48 hours.

Helmand is an important Taliban base as it produces most of the world’s opium, a crop that helps fund the insurgency.

Sangin district has bounced in and out of Taliban control for some years, and fighting there has produced some of the highest casualty counts among Afghan and international forces in 14 years of war.

British forces saw intensive fighting there at the height of the war in 2006 and 2007. Among the 450 Britishtroops killed during the country’s combat mission in Afghanistan, more than 100 died in Sangin. In 2008, a battalion of U.S. Marines arrived in Helmand, followed a year later by the first wave of President Barack Obama’s “surge” effort against the Taliban, comprising 11,000 Marines who conducted operations across the province.

The head of Helmand’s provincial council, Muhammad Kareem Atal, said about 65 percent of Helmand is now under Taliban control. “In every district either we are stepping back or we are handing territory over to Taliban, but still, until now, no serious action has been taken,” he said, referring to a perceived lack of support from the capital.

Districts across Helmand, including Nad Ali, Kajaki, Musa Qala, Naw Zad, Gereshk and Garmser, have all been threatened by Taliban takeover in recent months. Insurgents are also believed to be dug in on the outskirts of the provincial capital, Lashkar Gah.

Taliban fighters, sometimes working with other insurgent groups like the Islamic Movement of Uzbekistan, have managed to overrun many districts across the country this year, and also staged a three-day takeover of the major northern city of Kunduz. They rarely hold territory for more than a few hours or days, but the impact on the morale of Afghan forces, and people, is substantial.

Atal said more than 2,000 security forces personnel had been killed fighting in Helmand in 2015. He said a major reason Afghan forces were “losing” was the large number of soldiers and police deserting their posts in the face of the Taliban onslaught.

Fighting in Afghanistan has intensified since the announcement in late July that the founder and leader of the Taliban, Mullah Mohammad Omar, had been dead for more than two years. His deputy, Mullah Akhtar Mansoor, succeeded him, causing internal ructions and delaying the likelihood that a peace dialogue with theAfghan government, halted after the announcement of Mullah Omar’s death, will restart in the foreseeable future.

The expected winter lull in fighting has not yet taken place in the warmer southern provinces. U.S. and Afghanmilitary leaders say they are expecting a hot winter, followed by a tough fight throughout 2016.

The Pentagon released a report last week warning that the security situation in Afghanistan would deteriorate as a “resilient Taliban-led insurgency remains an enduring threat to U.S., coalition, and Afghan forces, as well as to the Afghan people.”

Associated Press writers Mirwais Khan in Kandahar, Afghanistan, and Humayoon Babur and Amir Shah in Kabul and Lolita C. Baldor in Washington contributed to this story.