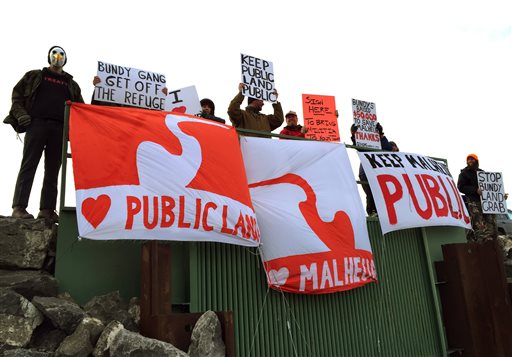 Demonstrators gather near a national wildlife refuge to protest against a group occupying the land Saturday, Jan. 23, 2016, near in Burns, Ore. The leader of an armed group occupying a national wildlife refuge in Oregon plans to have a ceremony Saturday for ranchers to renounce federal ownership of public land and tear up their federal grazing contracts. (AP Photo/Keith Ridler)

The Burns Paiute Tribe wants federal officials to bar armed activists from traveling back and forth to a national wildlife preserve they are occupying in southeastern Oregon, fearing tribal artifacts will go missing or the group will disturb burial grounds.

The small group took over buildings at the Malheur National Wildlife Refuge more than three weeks ago that store over 4,000 archaeological artifacts and maps detailing where more items can be found. Members of the group, who are occupying the site to oppose federal land use policies, recently posted videos to social media that show them looking at some of the relics and criticizing the way the federal government has stored them.

The artifacts belonged to ancestors of the Burns Paiute Tribe, which works closely with the U.S. Fish and Wildlife Service to preserve prehistoric sites and artifacts at the refuge.

The tribe has “grave concerns regarding the present handling of the occupation as well as the prosecution of the militants,” tribal chairwoman Charlotte Rodrique wrote in a letter Friday to U.S. Attorney General Loretta Lynch and FBI Director James Comey.

Federal authorities have taken a hands-off approach so far and say they want a peaceful resolution. One of the group’s leaders, Ammon Bundy, has been in contact with an FBI negotiator and local law enforcement.

FBI spokeswoman Beth Anne Steele said Monday that she couldn’t comment because of the ongoing investigation.

Members of the group have been able to come and go from the refuge, at times buying supplies at a local grocery store and occasionally meeting with government officials. Authorities have stayed away from the property, setting up their operational headquarters nearly a half-hour’s drive away in Burns. Officials there didn’t immediately return requests for comment.

“Allowing the militants free passage to and from the Refuge must stop,” Rodrique wrote.

The activists also have built a road through part of the refuge and taken down a fence, she noted.

“We fear that the demolition and construction activities of the militants may have harmed our burial grounds and disturbed Tribal artifacts,” she wrote.

There is a robust black market for Native American antiquities, she said.

“We fear that our Tribal cultural patrimony provides an all too easy funding source for the militants,” Roderique wrote.

But Ryan Bundy said about a week ago that the group was not interested in the artifacts and would turn them over to the tribe if asked. He also said the protection of prehistoric sites at the refuge should take a backseat to grazing and logging rights.

The federal government’s approach to the activists has increasingly frustrated some residents. Counterprotesters have begun to gather on the refuge with signs telling the group to go home.

Divisions also are starting to appear among law enforcement entities. The refuge is in Harney County, where local officials have been working closely with state and federal authorities.

Glenn Palmer, the sheriff of neighboring Grant County, recently endorsed some of the group’s demands, including releasing two local ranchers imprisoned on arson charges and sending home the FBI.

“The government tis going to have to concede something” to end the occupation, Palmer told The Oregonian newspaper (http://bit.ly/1KAecVt ).

Malheur County Sheriff Brian Wolfe, who has been helping Harney County and federal officials, said Palmer’s position is not helping.

“If anything, it hampers the effort to end this,” Wolfe told the newspaper.