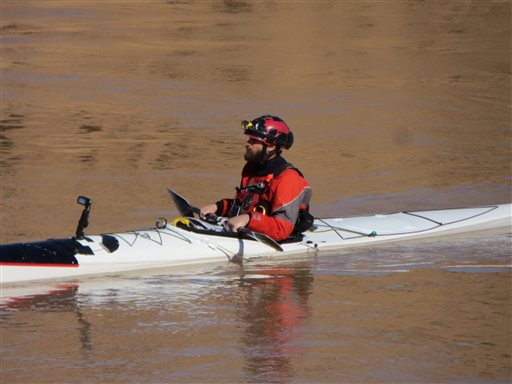 In this Sunday, Jan. 24, 2016 photo provided by Pamela Wolfson, Ben Orkin completes a record-breaking trip on the 277-mile stretch of the Colorado River through the Grand Canyon. Orkin paddled his kayak for 34 hours and two minutes. (Courtesy of Pamela Wolfson via AP)

FLAGSTAFF, Ariz. (AP) — A Denver man has logged the fastest Grand Canyon river trip on record, battling blisters and rapids as he paddled his kayak down a 277-mile stretch of the Colorado River in 34 hours and two minutes.

Ben Orkin reached the end of his journey Sunday, exhausted after navigating the water in the dark and swimming part of it when a rapid toppled his kayak. Orkin beat a record set last week by more than an hour and a previous one set by three men in a non-motorized boat in 1983, according to Tom Martin, secretary of the Grand Canyon Historical Society.

The unofficial records kept among river rafters started with Maj. John Wesley Powell, who rowed the river in 29 days in 1869.

Most people take their time on the river, stopping to hike within the canyon and camp. But river rafting enthusiasts say doing the trip as quickly as possible is becoming a personal challenge for some.

Orkin and a friend from college, Harrison Rea, attempted an overall speed record last January but fell an hour short. They lost time after Rea’s kayak got stuck and cracked, forcing them to repair it on shore.

Orkin launched his latest venture in the dark Saturday from Lees Ferry near the Arizona-Utah border, aiming to beat the 1983 record of 36 hours and 38 minutes that was set when the water was flowing much faster. On his way to the river, he got an email from a fellow kayaker that would make it even harder: Four men just finished the trip in 35 hours and five minutes.

Orkin said he knew within hours that he could beat that time if he kept up his pace of just over 8 miles an hour. He grew up in a family of whitewater river rafters, spent years developing a relationship with the Grand Canyon and trained hundreds of hours for a speed trip.

He was confident about a record run until he hit the Lava Falls Rapid, one of the most challenging on the river. The rapid rolled his kayak and sent him swimming for about half a mile to shore. He emptied the water in his kayak and kept going, he said.

Taking a break otherwise is out of the question, Orkin said. He carried food that was easily accessible and wouldn’t upset his stomach, a lighting system and a spreadsheet with the river miles. He launched his kayak based on the time of day he was expected to hit certain rapids.

“The planning is huge; it’s a very specialized skill set,” Orkin said. “Not only running rapids in the dark, but you have to be comfortable doing so alone and exhausted.”

He got a boost from other river rafters who cheered and clapped as he paddled by. But he said he went the last 22 hours of the trip without seeing anyone. And when the river calms about 30 miles after the last rapid, exhaustion set in.

“You have to paddle the hardest you’ve ever paddled to break the record at that point,” he said.

Martin, of the Grand Canyon Historical Society, and others tracked Orkin’s progress online, until he lost the GPS device in the water with less than an hour to go. A backup GPS gave him the exact coordinate that signaled the end of his trip at Lake Mead on the Arizona-Nevada border.

Veteran river rafter Craig Wolfson helped greet Orkin as he finished. He and Orkin’s father, Arthur Orkin, helped the record-setter off his kayak.

“It’s an amazing feat,” Wolfson said. “I stood there looking at him and was in awe of what he had accomplished — knowing what I do, having been through the canyon so much and what it takes.”