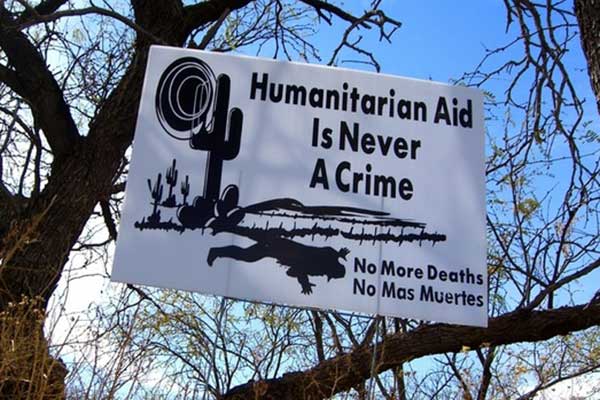 The defendants, all volunteers with the nonprofit group No More Deaths, were charged in 2017 with misdemeanors for their activities in the Cabeza Prieta National Wildlife Refuge on the U.S.-Mexico border.

The group places jugs of water and other survival supplies for migrants in the refuge.

Officials say hundreds of people have died in recent years making the trek across the unforgiving desert terrain.

Justine Orlovsky, a volunteer with No More Deaths, says providing humanitarian aid to save lives should not be a crime.

“The reason that we provide aid in that corridor is because we have found and recovered numerous human remains – upwards of hundreds over the course of years – so, we see that there is a need there,” she states. “That means people are traveling on foot through Cabeza.”

Orlovsky says No More Deaths is planning a rally outside the federal district court in Tucson, prior to the opening of the trial on Tuesday.

She says the nine volunteers were arrested by federal officers for violations such as leaving food and water in the refuge, driving the area without a permit and trespassing.

The U.S. Border Patrol maintains the volunteers’ actions are illegal and enable migrants to illegally enter the country.

Orlovsky disputes the Border Patrol’s accusations and maintains the charges are harassment against No More Deaths volunteers for their actions.

“We paid for permits to go on the wildlife refuge, but our folks are charged with abandoning property,” she states. “And that, of course, refers to leaving in water jugs, which is a misdemeanor.”

Estimates vary, but officials believe that at least 400 to 500 people have died in recent years attempting to pass through the desert refuge.

Orlovsky says hundreds of people volunteer to provide aid in the desert refuge.

“It varies depending on the month but, at any given time, including people local to Tucson and the Ajo area, somewhere in the 80 to 100 range,” she states. “So those numbers kind of fluctuate. We do have a consistent presence in the desert, year-round, so that takes some manpower.”

The No More Deaths charter states that its goal is to prevent death and suffering along the Mexico-U.S. border. The group says its volunteers have faced similar charges in the past, but none of them was convicted.