Jon Johnson Photo/Gila Valley Central: The Tri Community Tri is back to its old form. First-time racer John Miller, of Tempe, signed up on a lark and shocked the competitors by finishing first in a time of 1:23:48.

PIMA – The ninth annual Tri Community Tri went off without a hitch Saturday and both experienced and novice triathletes left the venue praising the event and its organization.

The Tri formerly encompassed the communities of Pima, Thatcher, and Safford but is now confined to the town of Pima and a slice of Graham County along the bike route.

A total of 98 racers were timed by CEP Timing, whose owner/operator Jason Kornetsky praised the smooth operation.

“The triathlon was put on very well,” Kornetsky said. “We do 50 a year and this was set up and directed as well as any of the others . . . For a small triathlon, this was perfect, and it came off well.” 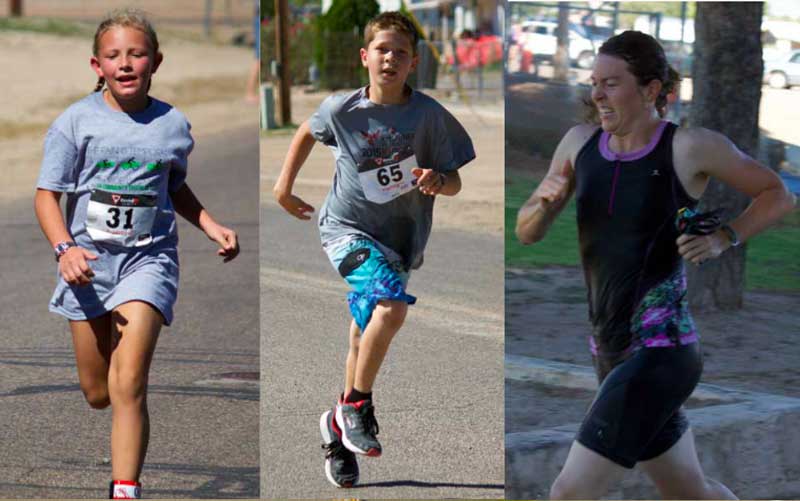 Brian and Angela Paull serve as race directors for the event and took over for race originator Chérla Ramsey last year after Ramsey moved. While it was an accomplishment to even have the race on such short notice last year, the Paulls have extended on building the event back toward its former glory. Everyone who works to make the race happen, including the Paulls, are volunteers and proceeds go toward a fitness-related purpose in the community.

The Paulls said they were drawn to the event because of its benefit to the community and, as avid triathletes themselves, they wanted to make sure it continued.

“I like to see the community come together for something,” Angela Paull said. “And then we get to donate all these funds back to the community, and so it feels good to help.”

“We always enjoyed running the triathlon in the past and we didn’t want to see the event stop,” Brian Paull said. “It’s the only one of its kind in the area, so we decided to take it over and keep it going.”

First-time triathlon competitor John Miller, of Tempe, took first place overall in the men’s division with a  time of 1:23:48 and did so on a single-speed, fixed-gear bicycle. It was a very competitive race, with second place going to Tony Wolff at 1:24:52 and third place to J. Brown at 1:28:20.

Miller, who grew up in Safford, said his uncle, Duane DeSpain, encouraged him to try it out and now he is hooked. Miller works as a personal trainer and was in good shape for the event but only had a couple of weeks to train.

“He convinced me I should try it out,” Miller said. “I was (going to be) in town for the weekend and figured (I) might as well . . . The run was definitely the hardest because I hate running. And then my quads started cramping up like halfway through, but I was able to push through, so it was good . . . My only goal was to beat Duane.”

Michael Burns is a 20-year veteran triathlon racer. He finished first in his 60-64 age bracket with a time of 1:49:10. He said the hardest part of the race for him was not knowing where he was in his age group during the race and that he was pleased with how well-run the event was.

“The swim was fairly easy, but the bike ride and the run were hard because of the heat,” Burns said. “It just felt hot the whole race . . . The road course was great. It was like perfect (with) very little traffic and the road was clean. The run course through town was really nice and all the volunteers were great. It was just a really well-run race. I really enjoyed it. I will be here next year.”

In the women’s division, Pima’s own Melinda Nelson outpaced the pack to finish first at 1:27:45, followed by Bonnie Richardson at 1:37:40 in second place and Clarissa Nelson in third at 1:39:40.

In the Mini, Jackson Paull finished first for the male division at 42:40, followed by his brother, Callin Paull at 45:50 in second place and Carden Richardson in third at 46:45.

In the Mini’s female division, Hannah Dannenbrink took first at 38:18, followed by Evelyn Brown at 44:20 in second place and Kamea Nelson finished third overall at 45:33.

The Paulls described the race as a family-friendly event and indeed several families had multiple members running in the Sprint or Mini.

Jon Johnson Photo/Gila Valley Central: The Petersons, from left, Briggs, Andy, Michele and Brittlee, were one of many families to compete together.

“It’s a lot of fun,” Brian Paull said. “(It’s) family friendly. Bring your kids (and) have your kids participate. We like to see the whole family get involved.”

Sarah Foote, who is blind, ran the Mini with the help of her friend, JoAnn Ungerman. Foote said she wasn’t sure if she could finish the race, not due to her vision but because she is also scheduled to have both of her knees replaced and a shoulder operation. The two women competed together and rode a tandem bicycle and were an inspiration to other racers and event attendees.

Jon Johnson Photo/Gila Valley Central: Sarah Foote, left, is led through the course by her friend, JoAnn Ungerman. Foote is not only blind but is scheduled to have knee and shoulder surgeries.

“I’ve never done anything like this,” Foote said. “This is my first time and I wasn’t even planning (to do it) because next week I’m going to have a knee replacement.”

Foote also has a second knee replacement and shoulder surgery scheduled for this year, she said.

Ungerman said the design of the race’s T-shirt was actually the deciding factor. When she described the shirt to Foote with the tagline “the pain is temporary the pride is forever”, Foote said her desire to own the shirt pushed her to sign up the night before the event.

“I couldn’t have done it without JoAnn,” she said.

Everyone Gila Valley Central spoke to said they planned on running the race again next year and the Paulls are on board to keep it going.

“You’ll see it again next year,” Angela Paull said. “Hopefully (it will be) a little bit bigger every year.”

The Paulls would also like to thank their sponsors for helping make the event possible.

“Without them, we couldn’t have done it,” Angela Paull said.