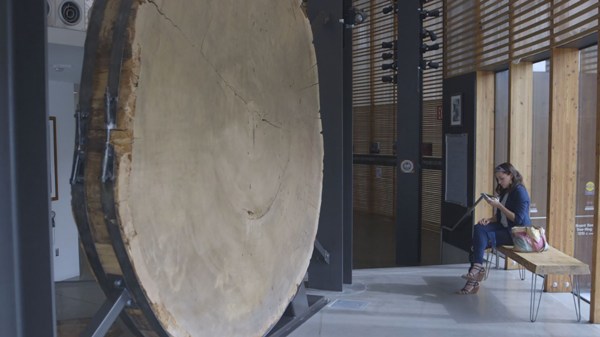 There’s a giant wood slab from a Sequoia tree in the lobby of the Laboratory of Tree-Ring Research at the University of Arizona in Tucson. Researchers at the lab are studying tree rings to better understand how climate change could impact the tropics. (Photo by Jordan Evans/Cronkite News).

TUCSON – Tree rings going back 800 years are giving researchers at the University of Arizona a window into how climate change could expand the planet’s most extreme deserts, including the Sonoran, which extends from the Baja Peninsula into Southern California and much of southern Arizona.

“We see a trend, atmospherically speaking, that the tropical region is moving further north in the Northern Hemisphere,” said Valerie Trouet, a dendrochronologist and associate professor at the Laboratory of Tree-Ring Research at the University of Arizona.

“We can determine how the edge of the tropics has moved over the last 800 years,” Trouet said.

Trouet, who co-authored a study published in October in the journal Nature Geoscience, found that the expansion of the tropics northward from 1568 to 1634 coincided with severe droughts, the collapse of Turkey’s Ottoman empire and the end of China’s Ming Dynasty.

“Our results suggest that climate change was one of the contributing factors to those societal disruptions,” said Trouet in a recent UA News article about the study.

The team’s findings are important because they could help explain how ongoing droughts could change some of the planet’s desert regions, including the Sonoran. The position of that boundary “affects the hydroclimate of many arid and semi-arid regions in the Northern Hemisphere,” the study said. The Sonoran Desert lies on the edge of the tropics, where air-driven atmospheric circulation sinks.

These huge atmospheric circulations are known as Hadley cells and they are the primary driver of the tropics. The National Weather Service describes Hadley cells as warm air rising at the equator, and sinking around 30 degrees latitude north and south. The result of this sinking air can lead to the creation of desert regions and prolonged droughts.

Hadley cells are responsible for the trade winds in the tropics and control low-latitude weather patterns.

By looking at data during this time, Trouet and her team analyzed changes in the tropics before human-caused climate change. By studying the past, she hopes to provide answers for how climate change could impact global natural disaster events, such as the intensity of wildfires.