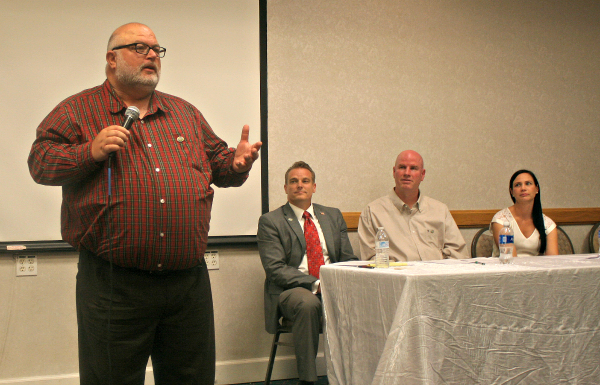 SAFFORD – It takes a village to raise a child. On Thursday night, our village in the Gila Valley came together to break the silence regarding substance abuse in Graham County.

The town hall meeting, which began at 6 p.m. at the Manor House, featured a panel of influential individuals within the community who answered the public’s questions regarding drug and alcohol abuse. Roughly 187 people attended the meeting, filling all available seating and standing at the rear of the room in overflow.

Kathy Grimes, coordinator of the Graham County Substance Abuse Coalition, gave a presentation near the beginning of the meeting in which she described the current drug statistics in Graham County.

“We are the second highest in the state for opioid-related deaths,” Grimes said, “So that’s alarming data for me.”

There was also a viewing of  Breaking the Silence – Addiction & Recovery, which is a video short created and produced by Kelly Van Shaar of Van Shaar Productions. The video depicts local individuals who have struggled and who continue to struggle with addiction.

As one of the speakers of the panel, Graham County Superior Court Judge Michael D. Peterson told Gila Valley Central that he wanted to express to the public how the court would hold people accountable and also aid them in their quest to become sober. He also stressed the importance of educating children about the dangers of drugs.

“The Graham County Superior Court will hold people accountable who violate the law, but we also want to give those who have a substance abuse problem the opportunity for rehabilitation,” he said. “The superior court acts as a partner with those who want to provide services to those who wish to help themselves.”

Peterson later went on to stress the importance of education. “If you never use illegal substances, you will never have a substance abuse problem. One of the things that is very important is that we do our best to proactively visit with children (and) explain to them the ill effects of illegal drug use.”

Safford Police Chief Joe Brugman, who was one of the participants on the panel, said the meeting was a great first step in the community.

“These are the early steps, working and talking to each other, learning about the real problem and looking to see what resources we can bring to the (Gila) Valley to help our community further,” he said. “And (we) look to say, ‘How can we educate our youth so that this problem is broken off at the lowest level of the chain?’ So that in twenty years, we can look back and say we fixed this.”

The gathering ended on a note of hope as the community was brought together to fight the disease of addiction.