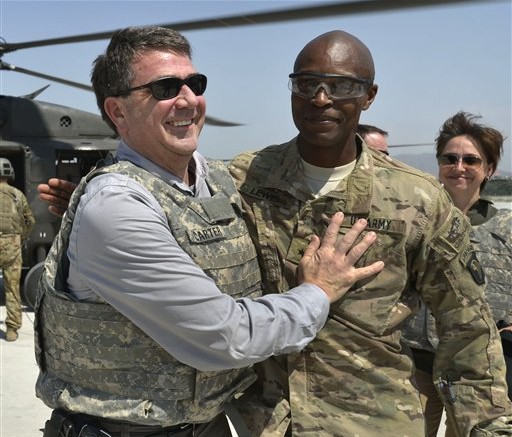 In this photo provided by the Department of Defense, then-U.S. Army Brig. Gen. Ron Lewis, right, greets then-Deputy Secretary of Defense Ash Carter, left, in Jalalabad, Afghanistan, May 13, 2013. Defense Secretary Ash Carter suddenly fired Lt. Gen. Ron Lewis, his top military aide Thursday, Nov. 12, 2015, citing allegations of misconduct, and referred the matter to the department's inspector general. Defense officials would not provide any details about why Lewis was removed from his job. A senior defense official said Carter learned of the allegations Nov. 10 and later informed the inspector general. (Glenn Fawcett/DOD via AP)

Defense officials would not provide any details about why Army Lt. Gen. Ron Lewis was removed from his job. A senior defense official said Carter learned of the allegations Tuesday night and later informed the inspector general. Carter was surprised by the allegations and met with Lewis Thursday morning, said the official, who was not authorized to discuss the matter publicly so spoke on condition of anonymity.

“”I expect the highest possible standards of conduct from the men and women in this department particularly from those serving in the most senior positions,” said Carter in a statement released Thursday. “There is no exception.”

The firing severs a long, close professional relationship between Lewis and Carter, and sent shock waves across the Pentagon. Lewis served as Carter’s military aide earlier in his career, including when Carter was the deputy secretary of defense. And when Carter was tapped to become defense secretary earlier this year, he chose Lewis, then an Army one-star brigadier general, to move into the three-star aide job.

Lewis had been slated for promotion to major general — with two-stars — but was quickly confirmed by the Senate for another promotion on June 23, after he started in the new job.

In his statement Thursday, Carter said that the Army may take any appropriate action against Lewis once the investigation by the inspector general is finished. Efforts to reach Lewis for comment were unsuccessful.

Defense officials said they could not even broadly characterize the allegations or say whether they involve any criminal activities, because of privacy law. The defense official said Lewis was not arrested and no other investigating authorities are involved.

Kathie Scarrah, communications director for the Defense Department inspector general said the office has received the referral from Carter and will conduct an investigation.

Lewis, who is from Chicago, graduated from the United States Military Academy at West Point, and later did three tours in Iraq and Afghanistan. As a one-star he served as the head of the Army’s public affairs office, until Carter asked him to become his senior aide.

Lewis has been reassigned and will be serving in the office of the vice chief of the Army while the investigation continues. The defense official said that Carter will select someone else soon to serve as his acting senior military assistant.