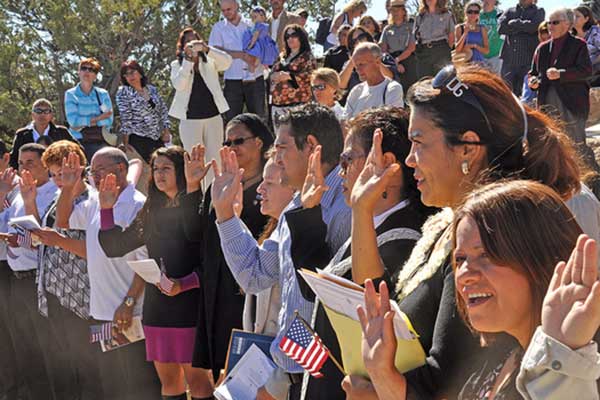 – The backlog of applications from legal residents waiting to become U.S. citizens has skyrocketed, and immigration rights groups are demanding answers, saying the delays are of special concern in an election year.

More than 14,000 Arizonans are legal permanent residents who qualify to become U.S. citizens but are waiting for their applications to be processed, according to the
National Partnership for New Americans.

“They’re going to continue paying taxes and obeying the law, but they will not be able to participate in the democracy of this country – meaning not eligible to vote – and a lot of people are looking to express their voice at the ballot box,” he states.

Monterroso’s organization is one of several that this week, submitted a Freedom of Information Act request to find out why U.S. Citizenship and Immigration Services operations have slowed so dramatically.

The application backlog has grown by nearly 90 percent since 2016. In Arizona, the rate of increase has been even higher.

Monterroso says more than 700,000 legal permanent residents across the country have gone through a lengthy process and paid hundreds of dollars in application fees, with little response from the government.

“They already have legal, permanent residence for more than five years, and filled out all the paperwork that’s required to become a citizen, and have shown that they are eligible,” he points out. “So, we need to figure out what is taking so long.”

Mayors of 46 U.S. cities and 50 members of Congress have written to U.S. Citizenship and Immigration Services to demand action on the backlog. That list includes Tucson Mayor Jonathan Rothschild, and Reps. Ruben Gallego and Raul Grijalva of Arizona.