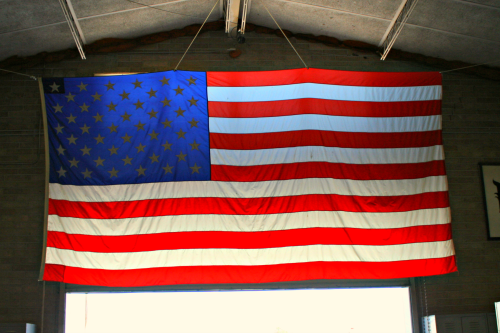 On Friday, May 20th, the Veterans Resource Fair was held at the Safford Armory. The third event of its kind, the Veteran’s Resource Fair was formally called Stand down. Forty-nine vendors participated in the fair, including Canyonlands Clinic. Canyonlands offered free dental to veterans. Eastern Arizona College had a vendor booth, as well as the Red Cross. The resource fair was also a mini job fair. The Safford DES office set up several rows of computers as an employment station. 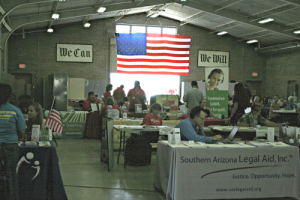 Among a vast sea of other benefits, a veterinary care provider was giving free animal vaccinations along with dog and cat food. There was also tables filled with clothing. Over twenty housing, behavior, medical, optical, shower/shelter and transitional housing programs were available.

Safford Mayor Gibbs gave a speech, thanking the veterans for their service.As a veteran himself, Mayor Gibbs’ comments were heartfelt and hopeful.

“This year is the largest one of the three, but hopefully next year we’ll blow this one out of the water too,” Samantha Bivens stated. Bivens was this year’s Provider Coordinator for the fair and the SSVF Outreach Specialist. “We have some great supporters, and this community is fantastic in supporting their veterans and we’re glad to work with them every year,” Bivens said.

Cliff Wade works with Old Pueblo Community Services to help homeless veterans find housing. Wade came from Tucson to help out the Gila Valley’s Resource Fair because it is a sister group. “We’ve (meaning Tucson) been putting on StandDowns up in Tucson since 2003,” he stated, “Up in Tucson we actually do two major groups. We do a three day StandDown when we put the homeless guys in a hotel for three days while we get them their services. Here, they almost doubled what they had last year and that’s a really good sign. It’s a good event, there was one gentleman who came through who was homeless. We made arrangements for him to get with the VA here and to get transportation to Tucson where there’s more options. When he gets to the VA here we’ll get him up there and work on getting him in housing because there’s a few more options up there. If we help just one it’s a great event,” Wade stated, “My goal is housing.”

If you know a veteran who needs help, contact Cliff Wade. Wade is a Veteran’s Outreach Specialist. Through his network, he will be able to assist the person in need.
520-405-4074