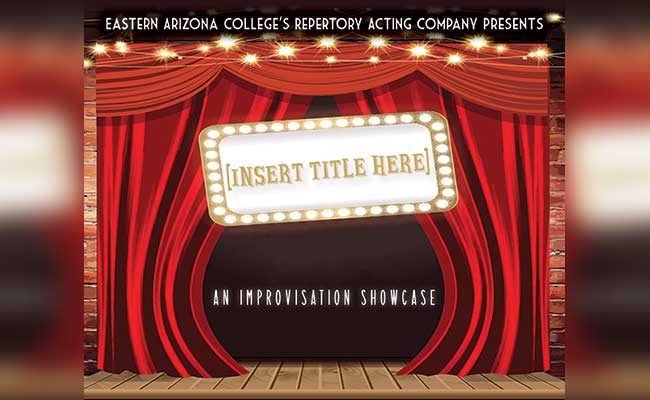 THATCHER, Ariz. — No lines. No characters. No problem. Watch as our company uses the power of improvisation to create something out of nothing!

Eastern Arizona College’s Repertory Acting Company is proud to present [insert title here] an improvisation showcase. In this show, you will see a variety of scenes, such as a party of peculiar guests, a frantic taxi cab, and a very unorthodox newscast – all created on the spot! Actors will create scenes based on ideas and suggestions from the audience, guaranteeing that each performance is different. Anything can happen…especially in this fun format!

Sarah Layden, one of the actors in this showcase, noted that, “In rehearsal, we get to learn the rules of improv and then apply it to our acting. I love the opportunities this company has brought to actively learn and participate. It’s so much fun!” Megan Codling added, “I like that we get to create something ourselves, and we get to work together to do it. In a normal show, you are just the actor, but in REP, you get to be everything.” As she noted, not only do actors perform, they also design lighting, set, sounds, publicity, and much more in contribution to this production.

[insert title here], an improvisation showcase, will share five hilarious and unique performances. EAC’s Repertory Acting Company invites you to join them in the South Campus 3 Theater on October 17-20, 2018, at 7:30 p.m. There will be a special matinee performance on Saturday, October 20, at 2 p.m. General admission is $3, and full-time students and faculty will be admitted free with a valid EAC ID. Tickets can be purchased in advance by calling EAC’s Ticket Office at (928) 428-8228, or outside of the theater before the show. Get your tickets in advance…this show is sure to sell out!