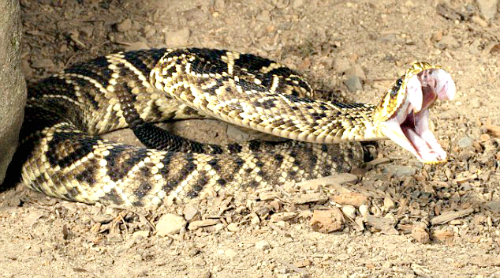 The weather has turned warm, and the sunlight is bright. However, with the warm weather, other creatures are coming out of hibernation. Already there have been reports of rattlesnake bites in the Gila Valley. Within the past month, a seven year old was bitten by a rattlesnake on Bonita Creek Road. Children are natural adventurers, but as their parents, we need to warn them about the dangers of rattlesnakes. Even though you may have told them previously about rattlesnakes, they should be reminded every year.

The first and obvious precaution is that if you see any type of snake, leave it alone. Rattlesnakes come in a variety of colors and shapes. Not every rattlesnake has rattles. Young rattlesnakes have no rattler and they are still capable of biting. Secondly, do not wander around in the snake’s hunting time or obvious habitat. Snakes usually hunt at night or early morning. During the daylight hours they keep to shady areas, so avoid tall grass. Be especially careful when climbing or moving firewood, since rattlesnakes hide in the shade of rock crevices and fallen trees. When you are swimming, never grab a floating stick. Rattlesnakes are very agile swimmers. Lastly, do not ever touch a freshly-killed snake. Dead rattlesnakes have a reflex in which they can still strike.

If someone has been bitten by a snake, do not apply a tourniquet, ice the wound, or suck out the poison. These methods are not effective. In the event of a rattlesnake bite, you should call 911. Keep the bite below the person’s heart if possible, and remove any tight clothing or jewelry in the event of swelling.

There are twenty-five different breeds of rattlesnakes in the United States. Most rattlesnake bites are on the hands and ankles because the snakes are accidentally stepped on or touched. According to the Food and Drug Administration, there are roughly eight thousand people bitten by rattlesnakes each year.