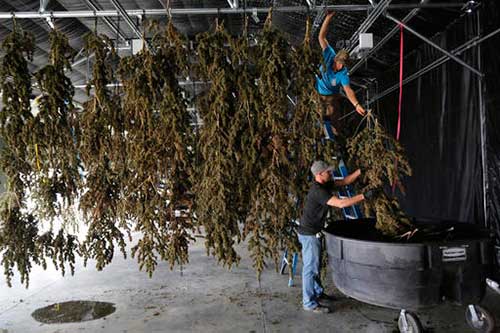 DENVER (AP) — Weed is winning in the polls, with a solid majority of Americans saying marijuana should be legal. But does that mean the federal government will let dozens of state pot experiments play out? Not by a long shot.

The government still has many means to slow or stop the marijuana train. And President-elect Donald Trump’s nomination of Alabama Sen. Jeff Sessions to be the next attorney general has raised fears that the new administration could crack down on weed-tolerant states 20 years after California became the first to legalize medical marijuana.

“We need grown-ups in charge in Washington to say marijuana is not the kind of thing that ought to be legalized. It ought not to be minimized, that it’s in fact a very real danger,” Sessions said during an April Senate hearing.

The Controlled Substances Act bans pot even for medical purposes. A closer look at some of the government’s options for enforcing it:

TAKE ‘EM TO COURT: The government rarely invokes its authority to sue states, but it’s the quickest path to compliance. The Justice Department could file lawsuits on the grounds that state laws regulating pot are unconstitutional because they are pre-empted by federal law.

Something similar happened in 2010, when the Justice Department successfully sued Arizona to block an immigration law that conflicted with federal immigration law.

Federal courts can also compel action, not just block it, as in Kentucky last year, when a county clerk was ordered to issue marriage licenses to same-sex couples following a landmark Supreme Court ruling.

Twenty-eight states and Washington, D.C., allow marijuana for medical or recreational purposes. The government has yet to sue any of them.

The Drug Enforcement Administration retains the legal ability to shut down anyone selling or growing pot, but there has been no coordinated federal attempt to close pot producers in multiple states. The agency has said repeatedly that it does not have the resources to pursue ordinary pot users.

Any change in that approach would likely require more money from Congress, which just saw many of its constituents vote in favor of legalization. And a federal agency probably will not spend limited resources busting people growing pot for personal use, said John McKay, a former U.S. attorney in Washington state.

“Who is going to stop people from smoking pot in a residence in Denver? Federal agents?” he said. “They are going to stop doing terrorism investigations and start arresting people for pot? That, to me, is crazy.”

Still, a series of raids could upend the marijuana landscape and chill investment in the fledgling industry.

Businesses selling marijuana cannot use tax breaks or incentives offered to other small businesses, and some of them say they pay 80 percent or more of every dollar on taxes and fees. They have limited access to banking because many financial institutions are leery of the paperwork they are required to file on clients working with marijuana.

Colorado officials tried last year to ease the banking burden by setting up a special credit union to safely handle pot-shops money, only to see the Federal Reserve Bank and federal courts block the effort.

As long as Congress and the new administration leave those hurdles in place, the marijuana business will grow haltingly. Voters may generally support pot legalization, but few have sympathy for a pot entrepreneur unable to become a multimillionaire because of banking obstacles.

STRICTER REGULATIONS: Government officials who are skeptical of marijuana but also leery of going against public opinion can use regulation and red tape to slow commercial pot.

In Colorado, for example, marijuana skeptics nearly succeeded earlier this year in getting state lawmakers to cap commercial pot potency. The proposal would have banned some 80 percent of the pot products on shelves.

Delays can be just as damaging. Even in Colorado, the first state out of the gate with recreational stores, businesses complain of long waits to get permits or licenses. A few shops were hobbled in 2015 when Denver health authorities raised alarms about pesticides and banned the sale of thousands of plants.

In Alaska, voters legalized pot in 2014, but shops are only just now opening. Washington state spent more than a year mulling rules for the pot business.

The marijuana industry has grown under three presidents, each opposed to legalized weed.

The Obama administration has generally shied away from pursuing commercial operators who comply with state-level rules. When states began pushing the marijuana experiment beyond the medical realm, former Attorney General Eric Holder urged them to keep the drug away from criminals, kids, federal lands and other states where it remains illegal.

Marijuana activists say the pot experiment is too far along for anyone to stop, but the industry is anxious. When Sessions was announced as the attorney general nominee, the pro-legalization group Drug Policy Alliance didn’t mince words.

“This,” the group announced in an urgent email to supporters, “was our worst nightmare.”

Kristen Wyatt can be reached at http://www.twitter.com/APkristenwyatt.