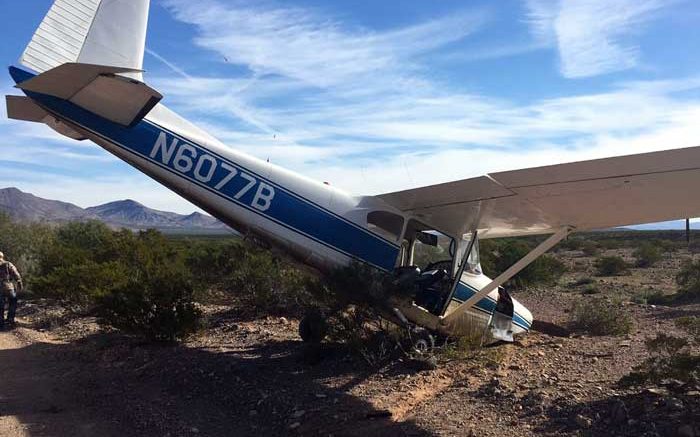 Photo By Safford Fire Department: A Cessna 182 made a forced landing on San Juan Mine Road on Thanksgiving after experiencing engine trouble.

GRAHAM COUNTY – A single-engine Cessna airplane made an emergency forced landing on San Juan Mine Road on Thanksgiving after the vehicle reportedly suffered engine failure. 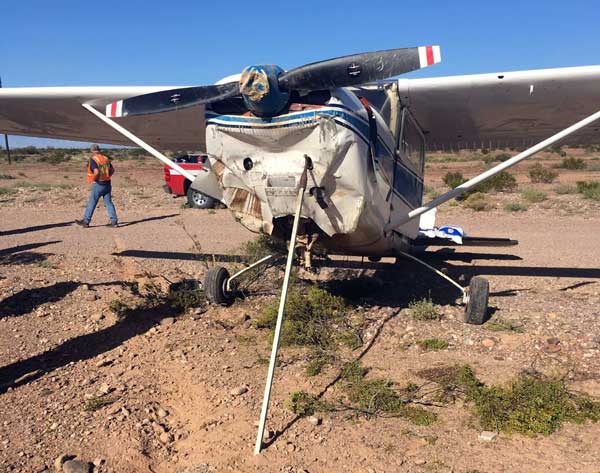 Photo By Safford Fire Department: The front of the plane took the brunt of the impact during the forced emergency landing.

Neither the pilot or his three passengers were injured in the forced landing, and the damage from the landing impact was limited to the nose cone of the airplane. The plane was described as being a white and blue Cessna 182 with a tail number of N6077B.

According to a Graham County Sheriff’s Office report, a deputies were dispatched to San Juan Mine Road about one mile from the Safford Regional Airport to look for the downed plane. The plane’s pilot, Steven Maxwell, had called Graham County Dispatch and alerted the office to his situation. Maxwell is the director of operations for Ponderosa Aviation, which is the fixed-base operator of the Safford Regional Airport.

Maxwell allegedly told the deputies that he had taken off from the Safford Regional Airport to fly to Holbrook and was in the air for roughly 30 minutes when he suddenly noticed his oil pressure drop rapidly.

After that, Maxwell reported he was unable to control the plane’s propeller, so he made the forced emergency landing on the road. A berm in the dirt road took the nose gear of the plane to the ground.

The Safford Fire Department was dispatched to the scene due to fuel leaking from the aircraft, but there was no further incident. 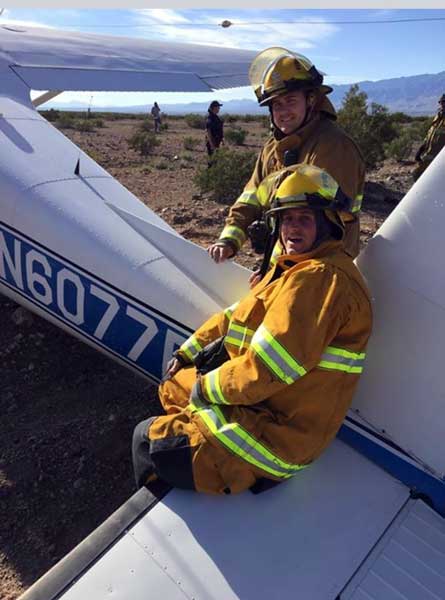 Further investigation showed that a piston rod apparently became loose and struck the engine. The National Transportation Safety Board was notified of the crash but declined to send an investigator. The representative of the NTSB, Josh Cawthra, instead advised the deputies to take pictures of the downed aircraft and send them and their report to him.

The three listed passengers included Maxwell’s co-pilot, Travis Maxwell, rear seat passenger, Breena McGehee and McGehee’s 1-year-old daughter, who was held by her mother during the crash. Breena McGehee, who is pregnant, complained of cramps and was transported to Mt. Graham Regional Medical Center for observation and was later released.

The plane was reportedly recovered by Ponderosa Aviation and taken back to the airport. However, after initially confirming the recovery, Ponderosa Aviation’s director of maintenance, Trent Nelson, declined to confirm or deny any information related to the crash because he said it was still under investigation.

“I’m not going to comment on anything like that,” Nelson said. “You’ll have to wait until everything is taken care of . . . This was not an Air Ponderosa Aviation aircraft.”

In 2011, Ponderosa Aviation co-owners Russell Hardy, 31, and Shawn Perry, 39, were killed in a crash along with Perry’s children, Morgan, 9, Logan, 8, and Luke, 6. Avionics technician Joseph Hardwick, 22, was also killed in the crash when the group’s Rockwell International 690A collided into Ship Rock – a rock formation near the Flat Iron area in the Superstition Mountains – the day before Thanksgiving. Perry had flown from Safford to Mesa to pick up his children and have them home for the holiday.