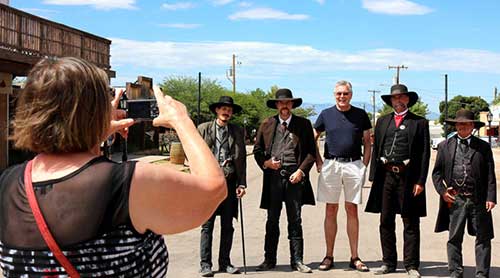 “We came here for the cowboy shows,” said Dieter Fuchs, a tourist who was visiting Tombstone with his family recently. They had come a long way to spend a day in one of the most famous towns from the Old West. “It’s a round trip from Germany,” said Fuchs, who is from Munich.

Tourism in Tombstone has been declining in general for years. But German visitors stand out, as they share a longtime fascination in Germany with the culture, the history and the mythology of the late 19th Century American West. Often, they bring with them more in-depth knowledge than a typical American tourist who comes to a town made famous mostly by a legendary street shootout, the 1881 Gunfight at the O.K. Corral, which lasted thirty seconds but has been famous for over a century.

“I have been to Tombstone more times than I can count,” said Daniel Stolte, a German-born science writer for the Office of University Relations at the University of Arizona. “Thinking back to when I was a kid, I have always had an interest in the Old West.” He has lived in Arizona for 12 years.

Foreign fascination with the Old West is not just confined to Germany, of course, but it is definitely more intense there. The earliest days of cinema in the United States featured western-themed “cowboy” and “cowboy and Indian” movies that were devoured by patrons in the teeming big cities of America, and exported abroad as moviegoing spread around the world. Germany, in particular, was a major market for U.S. motion picture distribution during the silent movie era of the 1920s and into the “talkie” sound movies starting in the 1930s.

The long German fascination with the American West stems in part from one literary figure: Karl May (1842-1912).

“Karl May is key to understanding the German fascination with the Old West,” Stolte said.

May (pronounced “My”) wrote stories of the Old West at the tail end of the Indian Wars in the late 19th century. May’s stories came from his own imagination, though bolstered by copious research. While he served as an introduction to the Old West for many Germans, in fact May “never traveled beyond Niagara Falls in North America, and even then only reached the falls late in his life long after he penned his famous novels of the American West, according to a book by Cheryll May (no relation), Seamless Web: Transatlantic Art in the Nineteenth Century.

It seems only appropriate that a figure who would be responsible for romanticizing the frontier only had a romanticized understanding of the frontier himself. His other novels were also set in exotic locales, underscoring the idea that what many people find fascinating about the Old West is not the historical accounts, but the exotic adventures.

In an article titled “Wild West Germany” in the New Yorker magazine in 2012, Rivka Galchen wrote, “May’s most beloved characters are a noble Apache leader named Winnetou and his blood brother, Old Shatterhand, a German immigrant to the United States. The good friends feature in fifteen of May’s eighty-odd works and are central in a series of films from the nineteen-sixties which were so successful that they are said, with only some exaggeration, to have saved the West German film industry. Most Germans can hum the theme music.”

However, the interest in the Old West and the frontier comes down to a bit more than just the idea of “Cowboys and Indians” for many Germans. Tombstone might be an Old Western town, but it is also in the middle of the Sonoran desert with unoccupied nature for as far as the eye can see.

“In Germany, there isn’t access to unspoiled nature,” said Stolte. “I think a lot of Europeans crave being out in the wilderness, having adventures.”

Any native of Southern Arizona is used to magnificent natural beauty under sunny skies.  Even for someone who lives in Tucson, a fairly large city, mountains and forest are accessible. This is not the case in most of Europe, and specifically in Germany, where many centuries of urbanization and deforestation have limited interaction between people and raw nature.

“We get a lot of visitors from Germany,” said Patricia, an employee at the Tombstone Monument Ranch who unaccountably declined to give her last name. “But also from France, Japan, and Brazil.”

Travel agents in Germany are known to send their clients out west for vacations in America. For example, German travel agent Bernd Walbert once said he sends over three hundred clients annually to the dude ranches of the American west, according to an article entitled A Fistful of Dreams: Taming the Wild West in the Old World that appeared in German magazine Munich Found.

Tourists from Asia and South America also come frequently to Tombstone, and from Tombstone they often head off to the Grand Canyon to see the other natural 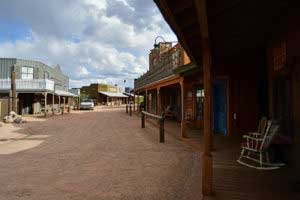 attractions of Arizona, according to Bill Longworth, a Tombstone resident.

“Sometimes you see large groups of tourists as part of a tour group goin’ around Tombstone,” said Longworth.

But among foreign Old West aficionados, the Germans have long been considered the most avid among Europeans, due to the enormous influence of Karl May’s novels and movies based on them. A 2007 travel article in the New York Times reported, “There are clubs, magazines, trading cards, school curriculums, stupendously popular German-made Wild West films and outdoor theaters, including one high in the sandstone cliffs above the tiny medieval fortress town of Rathen, in Saxony, where cowboys fight Indians on horseback.”

The so-called Indian Hobbyist movement remains strong in Germany, where “pow-wows” are organized by cultural clubs dedicated to the American Indian culture of the Old West. Invariably, while American Indians may be portrayed stereotypically, the Indian culture is treated respectfully as an underpinning of American history as seen from afar.

However, there has been cultural push-back. For example, in Lisa Michelle King’s critique of Karl May’s stories in her article for Studies in American Indian Literatures titled Revisiting Winnetou: The Karl May Museum, Cultural Appropriation, and Indigenous Self-Representation she speaks about “long held constructions of Native American peoples that exist to serve European American cultures” and that these constructions are important to dismantle “because of their influence on the thinking and action of people who use them.”

These romanticized stories about Native Americans and the frontier create distortions about native peoples and so “need critique and dismantling,” according to King. Perhaps the most notorious example of May’s influence was on Adolf Hitler, who was an avid fan of May’s work.

In Black Earth: The Holocaust as History and Warning Timothy Snyder talks about how many Germans at the end of the 19th century were wondering, “Where was Germany’s frontier, its Manifest Destiny?” In Germany at this time, according to Snyder, racism “turned populated lands into potential colonies” and the source mythologies for these ideas was the recent colonization of North America and America’s expansion west. Snyder even quotes Hitler as saying that “May had opened his eyes to the world.”

Karl May has been widely read in Germany for generations after his writings were published. To date it is estimated that over 100 million copies of his works have been published worldwide in around 39 different languages. The New York Times travel article described him as “a con man and Walter Mitty-like homebody who spent eight years in jail dreaming of Wild West adventures,” but he is still held in esteem in Germany.

For example, Stolte made the comparison between him reading Karl May when he was a child to the way children in the U.S. would read Mark Twain.

“A lot of kids read Karl May back then,” Stolte said. “He was read more perhaps than he is now.”