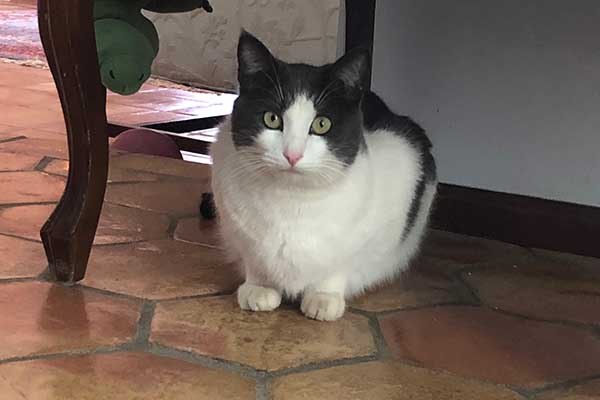 I never imagined that a cat bite could result in a trip to the emergency room and an overnight stay in the hospital. But when my mom’s cat bit me Friday morning that’s exactly what happened.

My parents have three cats. They didn’t want three cats but they have them nevertheless. Friday morning, their cat, Finnegan, decided to jump up in my lap. He made himself comfortable and was quite content until his arch nemesis, Princess, arrived. Finnegan hissed and started growling. About that time, I was ready to get up so I reached down to scoot Finnegan off my lap and he attacked. He bit my right hand so hard it drew blood in several places.

I’ve been bitten and scratched hundreds of times in my life, but something felt different this time. My index finger and knuckle felt like they had been bruised. I cleaned the wound with hydrogen peroxide, applied antibiotic ointment and wrapped up my hand with gauze. 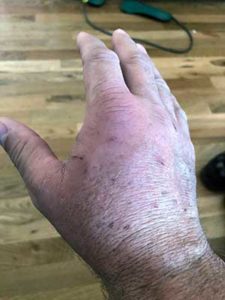 The pain continued to worsen. By noon, my hand had swollen significantly and I decided that I had better see a doctor. At 3:00 PM my doctor looked at my hand and told me that cat bites can be really bad. It turns out that cats have a nasty bacteria in their saliva called Pasteurella Multocida. According to a New York Times report this bacteria is present in 90% of healthy cats.

My primary care doctor prescribed an antibiotic and told me to take the first one right away. He told me if the wound continued to get worse in the next 24 to 48 hours that I should come back or go the emergency room. By the time my prescription was filled Friday evening, the redness, pain and swelling in my hand were increasing at an alarming rate.

I took my second dose of antibiotics Saturday morning, but it didn’t seem to be having much effect. At 10:00 AM Saturday morning I drew a circle around the affected area of my hand. By 3:00 PM Saturday afternoon the redness and swelling had expanded a half an inch further than the circle I drew in the morning. A red streak had extended halfway up my forearm and was painful to touch. Because of the swelling and pain, I couldn’t make a fist, or hold anything in my right hand.

I checked into the emergency room at 4:30. I felt a little awkward telling them I was there because of a cat bite, but they were not surprised. The doctor and nurse both told me that about 80% of the cat bites they see are infected. The ER doctor said he wanted to admit me to the hospital so they could hit the infection with intravenous antibiotics. They started an IV in the emergency room and moved me to a room at about 7:00. They administered antibiotics by IV every six hours.

The nurse had me soak my hand in warm water with Ivory Liquid. She said that the solution was a great way to clean wounds and prevent infection. “If you had soaked your hand in Ivory Liquid right after your cat bit you,” she said, “You might not be in here right now.”

The imaging tech came in to get an X Ray of my hand. “So you got bit by a cat, huh? Sounds like a great story. What happened?” After I shared my story, he shared a few anecdotal stories about cats while he took X Rays of my hand.

By Sunday morning, my hand was looking and feeling much better. The hospital doctor examined it and said he thought it would be ok to send my home with an industrial strength antibiotic. The warning label said, “This medication may cause a severe (rarely fatal) intestinal condition…”

Good grief. If the cat bite didn’t kill me, the antibiotic might!

By Monday morning, my hand was significantly better. I had regained full use of my right hand. There was still a little swelling and pain, but it is healing.

You’re probably wondering what happened to the cat. Finnegan’s fate has not yet been determined. I’m not going to harm him. I admit that I have considered capital punishment, but Finnegan will not be executed for his crime. He will, most likely, spend the rest of his days as a barn cat, hunting mice on a farm.