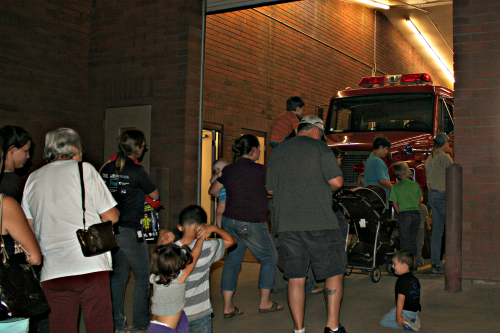 Brooke Curley Photo/ Gila Valley Central: The line to get into the Thatcher Fire Department open house was out the door and down the sidewalk.

THATCHER – It’s an annual event, but the parking lot was full anyway.

The Thatcher Fire Department’s open house stared at six o’clock. Children attending the event were given a balloon, a treat bag, and a coloring book, along with the customary fireman’s hat. As an added bonus  the attendees were served a dinner of hot dogs and chips.

Thatcher Fire Chief Mike Payne told Gila Valley Central that the open house is a yearly event. Although the department does not overly advertise the event, Payne said that it is usually well attended. 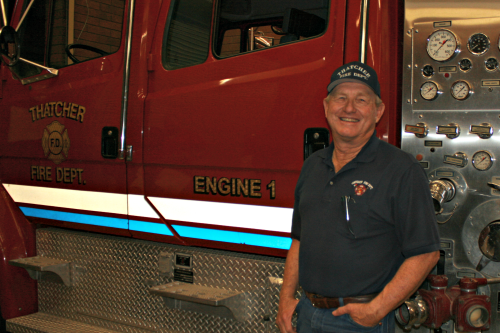 “We do one each year in conjunction with Fire Prevention Week,” Payne said. “We usually have 500 people visit. So far we’ve had roughly 450 people show up. That’s a pretty good crowd for a Tuesday night. It’s good to see the community come out and support us and get involved.”

When asked what the fire department might need from the community, Payne said that they’re always ready to accept community volunteers.

“We’re always looking for volunteers,” Payne said. Although the fire department is always willing to accept volunteer help, Payne told Gila Valley Central that the Thatcher Fire Department has a number 3 ranking, with 1 being a pristine fire department, and 10 being a poorly-run department. 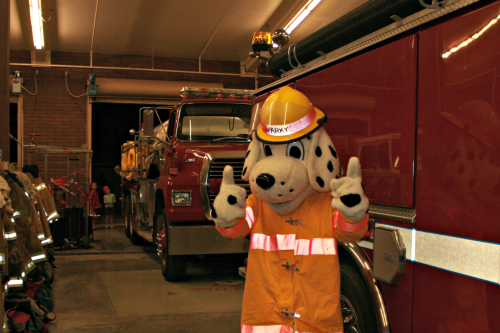 Brooke Curley Photo/ Gila Valley Central: Sparky the Dalmatian was at the fire station to visit with attending kids.