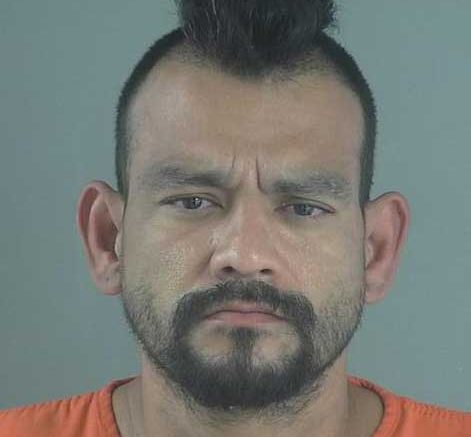 SAFFORD – A man was jailed Oct. 6 after allegedly spitting on his wife.

Martin Diaz Jr., 38, was arrested and booked into the Graham County Jail on charges of assault, criminal damage and disorderly conduct, with all charges being domestic violence.

An officer was dispatched to the Court Street Apartments at 828 W. Court St. at about 1:33 p.m. regarding a domestic dispute. The victim said she had gotten into an argument with her husband, Diaz, because she wanted him to get out of bed and go to the store with her. She said Diaz became angry and struck her head, so she left without him, according to a Safford Police report.

The victim then returned to the residence to retrieve a bottle for her baby but Diaz refused to let her leave. He then went on to break a door, punch out a window by hitting it multiple times, spit on her and blew his nose on her twice, according to the victim.

By the time officers responded to the scene, Diaz had left the area. Neighbors who were interviewed described hearing an argument and someone hitting a window multiple times before it broke.

Officers left but were called back at about 2:02 p.m. after the victim alerted them that Diaz had returned.

The suspect had left again before the arrival of officers, but this time he was located in the 800 block of 8th Avenue.

Diaz admitted the pair had an argument but said he walked away. When he came back to give her money to pay the rent, he said his wife wouldn’t talk to him and that she would just say he was in her way.

After reviewing all the evidence and statements, officers arrested Diaz and took him to the jail. The case was then forwarded to the Safford City Attorney, who charged Diaz with assault, criminal damage and disorderly conduct – all charges listed as being domestic violence.