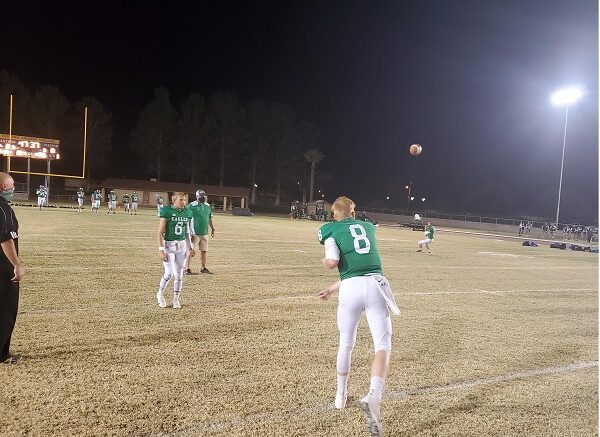 THATCHER — After not scoring on their opening drive of the game, Thatcher forced a quick three and out for San Tan Foothills. Mark Wren returned the punt 61 yards for a touchdown and the Eagles never looked back.

Three minutes later the Eagles were in the endzone again via the air. Quarterback Wyatt Larson found Brandon Napier on a 10 yard route and Napier did the rest with fancy footwork for a 35 yard score. Thatcher led 13-0 at the end of the first quarter.

Wren added runs of 44 and 1 yard in the second quarter to extend the Eagles’ lead to 27-0 at halftime.

The Sabercats took the opening drive of the third quarter and capped it with a 9 yard strike from Brett Lincoln to Cutter Kuhl to cut the Eagle led to 27-7. But that was as close as they would get as Wren added his 4th score of the night on a 5 yard TD run before Cody Jones finished off the Eagles’ scoring with a 6 yard score.

Lincoln tossed his 2nd score of the night with 16 seconds remaining to Justice Gutierrez to make the final 39-13.

Wren led the Eagles with 104 rushing yards. The team would rack up 216 total rushing yards. Larson ended the night 9-11 for 129 yards at the touchdown.

Thatcher moves to 3-3 overall and 2-1 in the 3A South. They will travel to take on the 4-1 Safford Bulldogs next week for an automatic spot in the playoffs on the line.