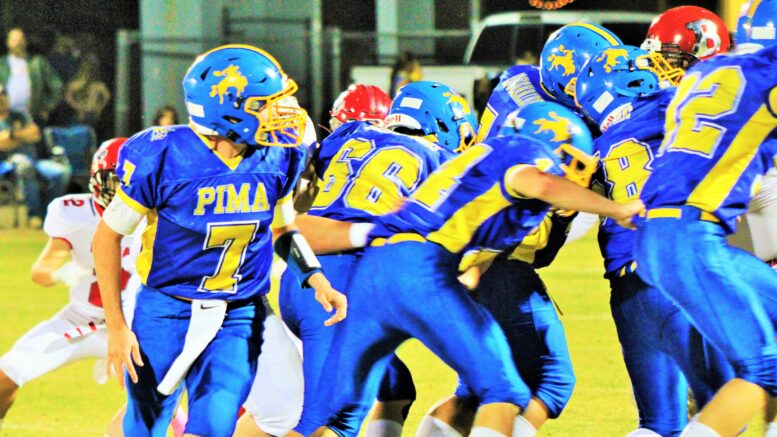 Pima’s Kaleb Blair (7) looks on as he hands the ball off in the second quarter. Photo By Ricky Crisp

PIMA — A dominant defense and a little pass offense to go with a stellar run game was the recipe for victory on Friday night for Pima over Bisbee.

“Tonight’s game we knew they were going to be a lot bigger than us, but we kept our heads up and pushed as hard as we could and get to our hole,” said Wyatt Wiltbank. “Moving forward we could work on hitting are holes harder, running the right routes and keeping our defense contained.”

Wiltbank had two rushing touchdowns in the game.

The Roughriders hit em with the hein right from the first whistle with their offensive line giving the running game protection all night long.

Caleb Barlow got things cooking early for the Roughriders when he made a juke move that lead him running to the outside for a 15-yard touchdown run to give the Roughriders an early 7-0 lead in the first quarter.

On Bisbee’s first offensive drive they were able to mustard up a first down but then where forced to punt which lead to a blocked punt that Pima recovered on their own 35-yard line.

Pima and Bisbee kept exchanging flags which took up the rest of the first quarter. Pima was determined to put the ball in the endzone and they did so on third in goal with a quarterback sneak from Kaleb Blair giving Pima a 14-0 lead.

Blair also had a passing touchdown in the game.

After the Pumas turnover the ball, the Roughriders took advantage and scored making it a 20-0 lead heading into half-time.

Pima kept the pedal to the metal in the second half, forcing Bisbee offense to struggle and make costly mistakes and taking advantage of a weak Bisbee defense.

The Roughriders turned to their passing game in the second half when they scored twice in the air with wide receiver Grant Ashby who also had over 100 yards receiving.