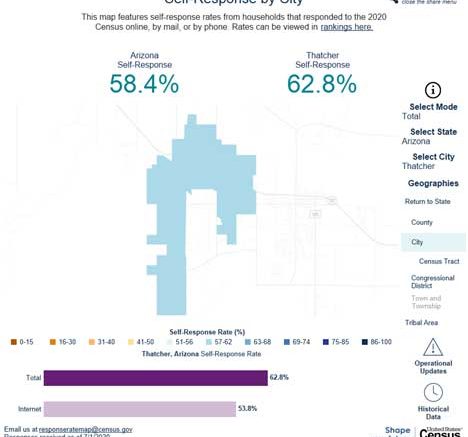 THATCHER — Thatcher and Safford continue to outpace both Graham County and the state overall when it comes to responding to the U.S. Census.

Thatcher is at a 62.8 percent response rate while Safford is at 60.8 percent. Graham County is at 51.1 percent, behind the state’s overall response rate of 58.4 percent.

Thatcher ranks 20th in the state in response rate, while Safford is ranked 23rd. Graham County’s other incorporated community — Pima  — is at 43.5 percent and is ranked 65th.

Graham County is eighth in the state in response rate. Tops is Pima County at 62.7 percent, followed by Maricopa County at 62.4 percent.

Topping the list of cities and towns is Oro Valley at 75 percent, followed by Sahuarita at 72.7 percent and Gilbert at 72.5 percent.