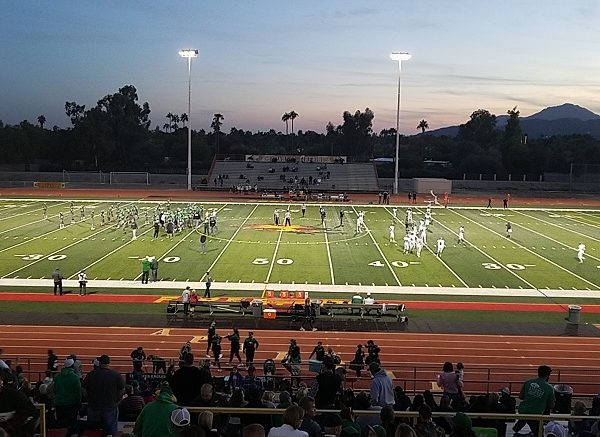 Thatcher and Phoenix Christian warm up before Saturday's Semifinal game.

It wasn’t pretty but it was effective is the perfect description of the Thatcher Eagles 35-7 win over Phoenix Christian in the 2A Semifinals Saturday night in Scottsdale.

Thatcher turned the football over twice in their first two drives, one of which turned into a 1 yard touchdown run by PC’s Malik Taylor to give the Cougars a 7-0 lead. That was foreign territory for the Eagles, they hadn’t trailed since September 7th against Safford.

Thatcher righted the ship in the 2nd quarter however and rolled up 21 unanswered points. Running Back Treven Clark starting the scoring barrage with an 11 yard scoring run to start the quarter. Thatcher followed it up 3 minutes later with a 4 yard run by Riley Morris that was set up by a Ben Shumway blocked punt. The Eagles last score of the quarter came via the legs of QB Jack Kortsen on a 26 yard TD taking a 21-7 lead at halftime.

The third quarter was a defensive battle as neither team threatened to score. PC was able to move the ball between the 20 yard lines but weren’t able to put up any points.

Thatcher went back to their power running game in the 4th quarter and it paid off as Kortsen broke free from 52 yards out to give Thatcher the commanding 28-7 lead. The Eagle defense set up the final score of the night after their 3rd interception of Cougar QB Mark Encinas. RB Brock Jones powered in from 11 yards out to seal the win 35-7.

Phoenix Christian was led on the ground by Man-Man Freeman’s 128 yards. Malik Taylor was held to 91 yards on 24 carries. He did score the lone Cougar TD.

Thatcher Head Coach Ramon Morales credited the offensive line with keeping drives alive until they were able to break long plays. “We knew this was going to be a tough physical game,” he said. “I thought we did a great job limiting (Malik) Taylor and (Man-Man) Freeman, our special teams came up huge too.”