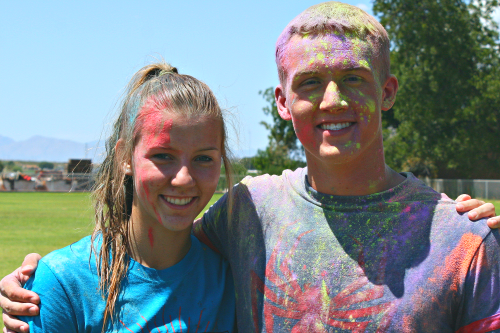 Brooke Curley Photo/Gila Valley Central: From left, Kaitlyn and Conner Palmer get colorful at the opening social at Thatcher Park.

THATCHER – When it comes to throwing a party, The Church of Jesus Christ of Latter-day Saints’ Thatcher school’s seminary literally comes through with flying colors.

The Thatcher LDS Seminary group held an opening social at Thatcher Park on Saturday, Aug. 20. The event featured a color run, which consists of bags of holly powder the students dowsed each other with.

School has started its fall semester, and it was time for the seminary’s yearly opening social. David Palmer, one of the leaders of the Thatcher LDS Seminary group, said that the community of Thatcher helped throw a great opening social.

“There was an outpouring of community service for and a good time for these kids,” Palmer said. “Each year we have an opening social just to kick start the year. We have 10 teams, so we have 10 seminary classes a day at Thatcher High School. The idea behind it all is just class unity and to build a lot of unity in these kids. Everybody is welcome; a lot of kids brought their friends who aren’t enrolled in seminary. We had snow cones provided by Hawaiian Snow, and Thatcher Fire Department provided the service of the water.”

The day’s activities included five obstacle courses, a selfie station, snow cones and a color run. Roughly 200 kids participated in the opening social, and, at the end of it, everyone was cooled off by the Thatcher Fire Department.