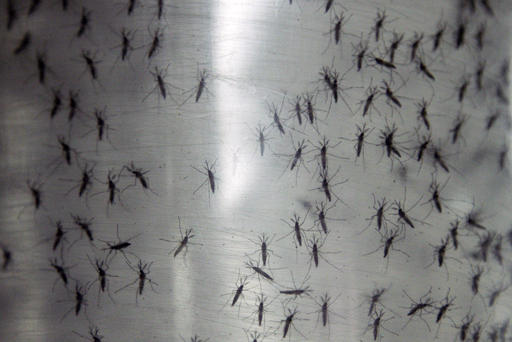 FILE- In this Sept. 25, 2014 file photo, containers hold genetically modified aedes aegypti mosquitoes before being released in Panama City, Panama. The U.S. Food and Drug Administration is considering whether the biotech firm Oxitec should test its lab-bred mosquitoes near Key West. The public has until midnight Friday, May 13, 2016 to weigh in on a plan to release genetically modified mosquitoes in Florida. (AP Photo/Arnulfo Franco, File)

MIAMI (AP) — What are you more afraid of, the Zika virus, or genetically engineered bugs being released in the wild?

If you feel strongly about this issue, you have until midnight Friday to make your opinion known as the U.S. Food and Drug Administration considers whether to approve an effort to kill the disease-carrying mosquitoes by releasing genetically engineered bugs in Florida.

The biotech firm Oxitec plans to release non-biting male mosquitoes that have been modified to produce offspring that don’t survive after mating with wild females. Researchers believe that within a few generations, this should sharply reduce the mosquito population.

Scientists have weighed in on both sides in the nearly 1,300 comments viewable online so far. Fear is also a common theme, but there’s a split over what people find more frightening: genetic engineering, or birth defects linked to Zika.

Supporters are expressing confidence in the FDA’s evaluation, Oxitec’s data and reports about similar international trials. They say the risks of mosquito-borne diseases outweigh fears about releasing a genetically modified species into the wild. And some say they distrust GMO foods but still consider Oxitec’s plan more environmentally friendly than pesticides.

While supporting the FDA’s preliminary determination that it’s safe to release these GMO bugs, the American Biological Safety Association questions whether Oxitec’s technology is practical. The American Bird Conservancy also is in favor but wants more details about how the trial near Key West would be monitored.

Alyson Crean, a Keys resident who could be directly affected by the trial, expressed her full support.

“Having contracted dengue here in the Keys, I know how insidious” insect-borne diseases are, she writes. “The Mosquito Control District has provided thorough due diligence as to the safety and efficacy of using the modified mosquitoes.”

Critics raise the potential consequences to human health and the environment of releasing GMO mosquitoes without more long-term research, arguing that the risks are too high even amid a global health crisis.

“We are the citizens, as are you, and the last thing we deserve is a rushed process when it is so deeply concerning and non-controversial, more effective alternatives exist,” writes Barry Wray of the Florida Keys Environmental Coalition, which has led protests against Oxitec.

Wray and other opponents favor infecting mosquitoes with bacteria that curb their ability to transmit viruses, arguing that the technique is more effective and less polarizing.

There are plenty of informed, objective comments as well as passionate statements on both sides, but emotional pleas are far more common among opponents, who fear unwilling U.S. citizens will become guinea pigs. Some call the plan “insanity” and cite the “Jurassic Park” film series in warning against genetic tinkering. Others say little more than, “HELL NO GMO!”

Others compare Oxitec’s proposal to GMO crops created by Monsanto (which isn’t involved) and beg the government to stop approving any genetic engineering in food or insects.

A March poll conducted by The Associated Press-NORC Center for Public Affairs Research found only 16 percent of Americans opposed to using genetically modified mosquitoes to control Zika; 26 percent were neutral.

Nearly no comments have been submitted for applications that the University of Kentucky’s Department of Entomology has pending with the U.S. Environmental Protection Agency to extend tests of bacteria-infected mosquitoes to the Florida Keys and Orange County, California, and to register specific bacteria as a pesticide product.

Residents in the Keys neighborhood chosen for Oxitec’s trial will be able to vote on whether they want to participate during a county election on August 30. The ballot question’s results will be non-binding, but officials at both the FDA and the Keys mosquito control district have repeatedly said they want to take the people’s opinions into account.