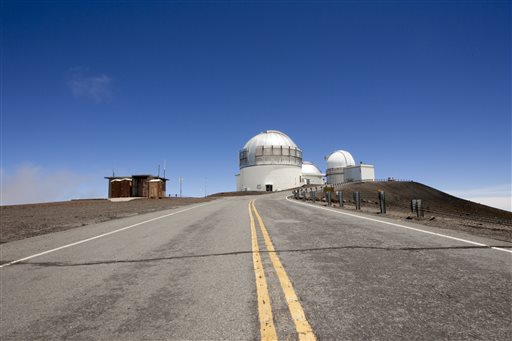 FILE - In a Monday, Aug. 31, 2015 file photo, telescopes are shown on Hawaiis Mauna Kea, near Hilo, Hawaii. The University of Hawaii announced the third Mauna Kea observatory that will be decommissioned, Wednesday, Oct. 21, 2015, fulfilling the governor's request to remove 25 percent of the telescopes from the mountain. The university on Wednesday said the third one marked for decommissioning will be the UKIRT Observatory, formerly known as the United Kingdom Infrared Telescope. (AP Photo/Caleb Jones, File)

HONOLULU (AP) — The University of Hawaii announced Wednesday that a third observatory will be taken from Mauna Kea — a move that fulfills the governor’s request to remove 25 percent of telescopes from the mountain considered sacred by many Native Hawaiians.

Gov. David Ige made the request in May amid protests against the building of a giant $1.4 billion telescope near the summit of the mountain.

Ige said 25 percent of the 13 telescopes already on the mountain must come down before the new Thirty Meter Telescope is ready for operation.

Construction of the new telescope has been stalled since April, when protesters blocked crews from the site.

The nonprofit company building it hasn’t indicated when it will resume construction, but the facility is still expected to be operational by 2024, spokeswoman Caroline Witherspoon said.

The university said the latest telescope marked for decommissioning will be UKIRT Observatory, formerly known as the United Kingdom Infrared Telescope. It was first targeted for removal in 2009.

“It will be completely removed and the site will be restored and not used anymore,” said Guenther Hasinger, director of the Institute for Astronomy of the University of Hawaii at Manoa.

The Caltech Submillimeter Observatory has already stopped operations and started the decommissioning process along with the University of Hawaii’s Hoku Kea telescope.

Kealoha Pisciotta, a longtime critic of the Thirty Meter Telescope, said decommissioning can be just as destructive as building a telescope.

“It will be done in a very careful fashion,” Hasinger responded. “There are multiple opportunities for the public to review what we are doing. And we are trying to do it as environmentally sensitive as possible.”

Hasinger said it will be six or seven years before the observatory is removed at an estimated cost of as much as $3 million. The money has already been provided by the United Kingdom.

“This is something that has never been done before anywhere in the world,” Hasinger said of estimating the cost of removing a telescope from a mountain.

The other two facilities are smaller and will be easier to take down, he said.

In the meantime, the telescope will continue its contributions to science.

“It will have a rich scientific life in the next few years,” Hasinger said.

One criticism of the telescopes on Mauna Kea is the $1 a year lease rate.

The amount is “symbolic” because of the financial benefits observatories provide Hawaii, including hundreds of jobs and $10 million a year in state income taxes, Hasinger said.

The Thirty Meter Telescope is expected to pay $1 million a year for its lease.