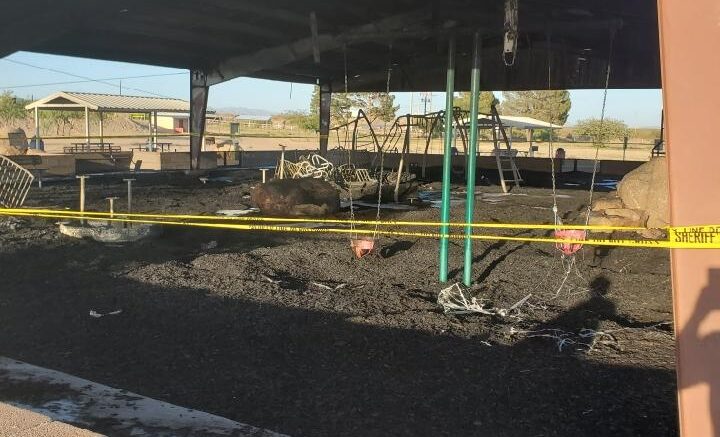 Three teens playing with matches are reportedly the cause of the fire that destroyed the playgrounds at Graham County Fairgrounds on Friday. - Lee Patterson Photo/Gila Valley Central

Sheriff’s deputies said the call of a fire came in at 3:39 p.m., but deputies were already en route due to the amount of heavy black smoke in the area.

There, deputies found three teens – two 13-year-olds and one 14-year-old – who reportedly admitted to playing with matches, which started the fire. The teens said they tried to put out the fire with dirt, but strong winds moved the fire to the east, keeping the blaze alive.

Safford Fire Department arrived on scene almost immediately and extinguished the fire. Cost estimate of the damage has not yet been compiled.

The parents of the teens were notified.

“The irony is we have budgeted $250,000-plus for upgrading the playground, with a solid rubberized surface, equipment, sidewalk and drinking fountain additions,” he continued. “We are insured so we will build it back even better right away.

“Thank you Safford Fire for the always quick response. We are lucky to have them.”