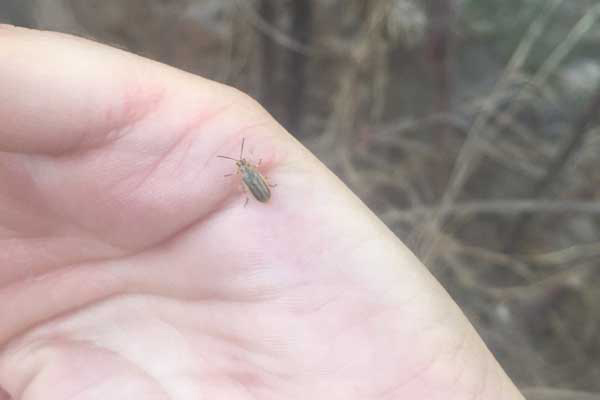 Contributed Photo/Gila Watershed Partnership. The tamarisk beetle, which feed on salt cedar, has been found along the San Francisco River.

SAFFORD —After years of waiting, the beetles have arrived.

“For the last few years, the closest population — and I love telling people this because it’s so bizarre — was a truck stop in Lordsburg, N.M. It was stuck there,” Melanie Tluczek, executive director for Gila Watershed  Partnership, during a recent appearance on Voice of the Valley.

On its social media, the Gila Watershed Partnership reported that tamarisk along the San Francisco River was damaged and, upon closer inspection, thousands of the beetle were discovered, as well as beetle larva and eggs..

The beetle devours the leaves of the tamarisk, an invasive species found along the Gila and San Francisco rivers, which can create flooding issues should the Gila Valley see significant rainfall, as well as increased risk of wildfire.

“The restoration that the Gila Watershed Partnership does is in preparation for that,” Tluczek said.

Another issue is that the endangered willow flycatcher makes its nest in tamarisk, so the GWP is evaluating ways to assist the flycatcher in relocating to native plants and trees.

The GWP is seeking help in monitoring the beetle. Those interested in helping should contact Kara Barron at kara@gwpaz.org.