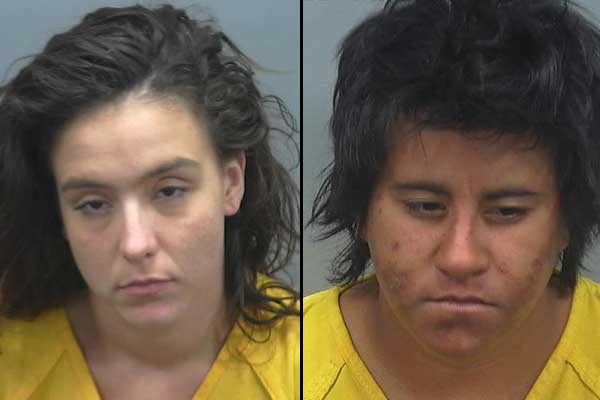 Safford – Two women were arrested on Main Street in Safford last Wednesday after a concerned citizen alerted police to a possible break-in attempt in an alley off the 500 block of 7th Avenue.

When police arrived at the scene the reporting party said she had seen two males and one female in the alley attempting to get into a storage unit. The witness said the two men had shaved heads and the woman had on white pants and a black top. She reported that two of them also had a bicycle. As officers investigated the alley where the activity had allegedly taken place, they noted there were three different foot prints in the powdery dirt. Bicycle tire tracks were also visible in the dirt. The investigating officers noted that the bottom of the storage unit door had recently been pulled out and had pushed the powdery dirt away from the opening. 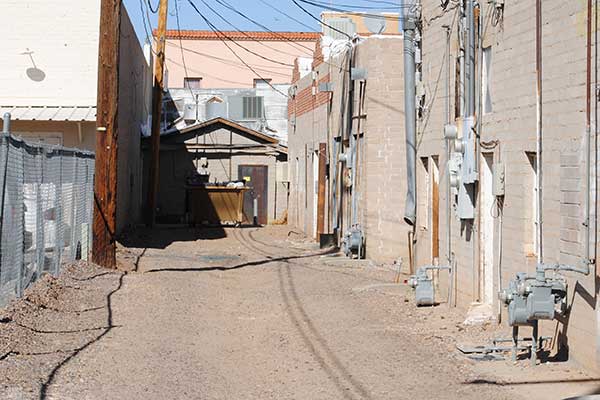 After photographing the tracks in the dirt and the door of the storage unit, police found a woman and two men standing in front of Trophies N Tees on Main Street. When the trio saw the police they quickly darted into the store. Officers escorted them out of the business and separated them to interview them about the alleged break in attempt.

The first male subject, identified in the police report as Jerry Morris, matched the description given by the witness and admitted that he had been in the alley with the two women. He insisted that he had nothing to do with the storage unit being, “messed with.” Morris said that he was just waiting for a friend to get out of a meeting with his probation officer. Morris consented to a pat search but police did not find any stolen property or contraband. The other man, identified as Kevin Baylor also matched the witnesses description but claimed that he had never been in the alley and that he had been at the probation department.

The woman, identified as Domavee Perea told police that she and the Morris were in the alley waiting for Baylor to get out of probation. She said that nobody had tried to break into the storage unit, despite the evidence the police had collected. A background check revealed that Perea had an outstanding warrant and she was taken into custody.

After being placed in handcuffs Perea admitted that she was in possession of drugs and paraphernalia. She said that she had two pipes, or “meth pies,” and some oxy pills. She claimed that the pills were hers but that the pipes belonged to Tonya Reed. A female officer apparently located the pipes and pills, which Perea had stashed in her bra.

Police managed to locate Tonya Reed, who was a couple blocks away, and brought her back to the scene to be interviewed. As they began to advise her of her rights, she attempted to run away. Police were able to stop her and take her into custody without further incident. As they, once again, advise her of her rights, Reed said that she, “pleads the 5th.” She later claimed that the pipes found on Perea were not hers.