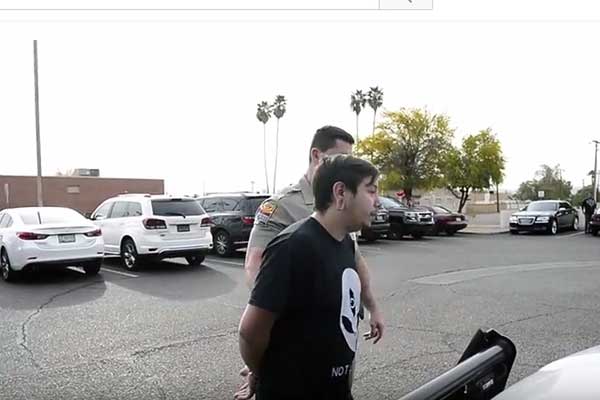 Maricopa County, Ariz. — After realization of the serious charges against him, a wrong-way driver that caused two collisions resulting in several people injured, turned himself in to troopers in front of the Department of Public Safety (AZDPS) headquarters building in Phoenix on Tuesday, March 13, 2018.

The initial incident occurred February 2, 2018, around 2:55 a.m., when troopers responded to reports of a wrong-way driver and subsequent collision on Loop-101 near Guadalupe Road. Troopers investigated two separate collisions involving a total of five vehicles and four injuries, including the wrong-way driver. The wrong-way driver, identified as 26-year-old Shane Hidalgo of Scottsdale, was transported to the hospital and admitted for serious injuries.

On the morning of March 13, Mr. Hidalgo turned himself in at AZDPS headquarters in Phoenix. Mr. Hidalgo was arrested and booked into the Maricopa County Jail on charges of aggravated assault, four counts of criminal damage, three counts of endangerment, super-extreme DUI, possession of marijuana and possession of drug paraphernalia.

Colonel Frank Milstead said, “Wrong-Way drivers pose a serious threat to public safety and once again, impairment was the cause. We need the public to understand the gravity of the decision to drive impaired, so they never have to face the grave consequences. As Arizonans, we need be intolerant of friends and family getting behind the wheel impaired, so that the behavior becomes socially unacceptable.”