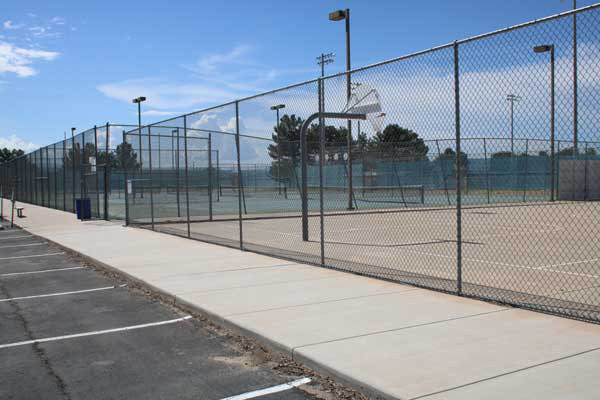 The tennis and basketball courts at Safford High School will be available to the general public during non-school hours thanks to a new agreement between the school district and the city. - David Bell Photo/Gila Valley Central

SAFFORD — The City of Safford and Safford Unified School District will be working more closely together following an agreement unanimously ratified by the City Council on Monday.

The agreement allows the city to use certain school facilities for city recreational programs, including the Middle School gymnasium; the basketball courts, tennis courts, pickleball courts and restroom on Bulldog Boulevard, at the southwest side of the High School; outdoor practice fields; and the 8th Avenue walking track.

In return, the city will pay the district $10,000 for the first year — with actual costs for latter years to be determined based on the first year’s use — and help with field maintenance.

The city has also agreed to assist the school district with capital improvement projects, such as when fields located east of 14th Avenue, behind the bus barn, are ready for development.

After this first pilot year, the agreement can be renewed by the city and the district for three-year increments.

Vice Mayor Richard Ortega asked if the agreement could mean development of a city-sponsored youth wrestling program, and City Manager John Cassella said it depends on what residents want.

“For example, in this year’s budget we put some money in and it’s anticipated right now that it may turn into a volleyball program,” Cassella said. “So this will be an evolutionary process, depending on the money available and the interest.”

The school district’s Governing Board unanimously adopted the agreement on July 14.