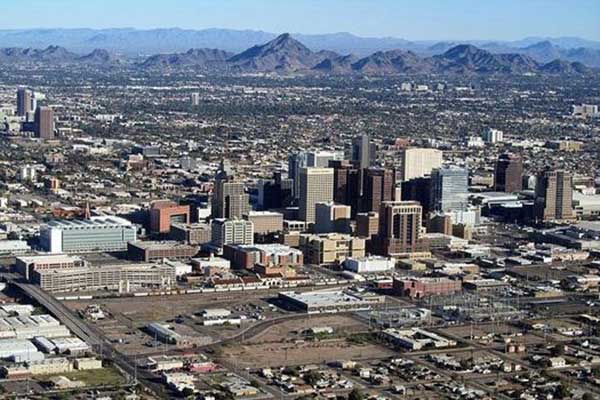 Public health officials say more than 150 deaths were attributed to the intense heat this summer, a number that has risen steadily for the past decade. Maricopa County officials have teamed up with Arizona State University’s School of Sustainable Engineering to develop ways to cut the heat and improve air quality.

“We’re looking at alternatives to paving,” says Fraser. “Things like porous paving or paving coatings, which would reflect some of the heat. We’re looking at understanding the interactions between paving and building materials, because sunlight reflected off the paving often impacts on buildings.”

This summer, the region saw 128 days of temperatures over 100 degrees, with 22 days hitting 110 or higher. But Fraser says the real problem isn’t the daytime heat but overnights, where the average low temperature has increased by 17 degrees in the past few decades.

He says the excessive heat is especially hard on people with low incomes and the homeless, who can’t afford or don’t have access to air conditioning. He says the goal is to make cities like Phoenix safer and more livable.

“So, the idea would be to develop new technologies to work with communities and stakeholders,” says Fraser. “To get those technologies first tested, to make sure that they’re effective and then, understand how they can be deployed in a broad setting in a community.”

Fraser says the extreme heat also causes air quality problems, making it more difficult for people with respiratory ailments like asthma to cope. And the heat causes the region to experience major dust storms, called haboobs, about a dozen times a year.

“We have a stake in making sure that our community is as healthful as possible,” says Fraser. “And part of the issues that impact health are things like urban heat, which prevents people from enjoying the outdoors, as well as air quality, which impacts the health of many of our local citizens.”

He notes while Phoenix is one of the hottest large cities in the country, there are dozens of others in the U.S. and around the world with similar climates that could benefit from the research.