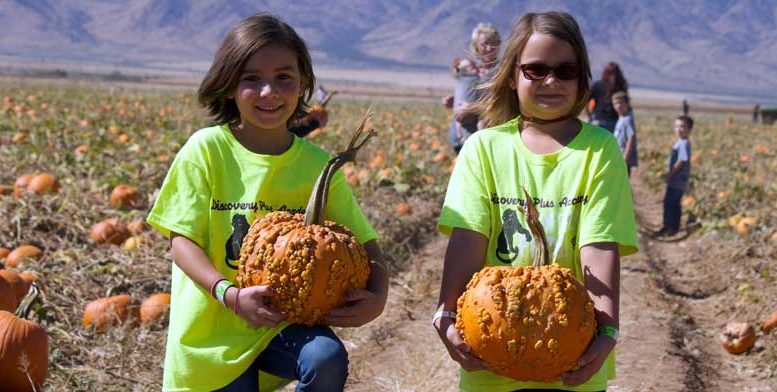 Jon Johnson Photo/Gila Valley Central: From left, Nehemiah Varume and Madison Logan show off their warty pumpkins they selected during a field trip to Apple Annie's on Thursday.

WILLCOX – Gila Valley Central was embedded with the students from Discovery Plus Academy as they took their annual field trip to Apple Annie’s Produce & Pumpkin Patch on Thursday.

11:00 a.m. – The convoy of minivans and Suburbans arrive at 6405 W. Williams Road, the location of the patch, and realize it is a popular place for field trips as elementary schools from Thatcher and New Mexico are also on location.

After a gathering for a quick lunch under the ramada, the children gleefully play in the corn pit, yelling and jumping and making “corn angels.” Corn gets everywhere. 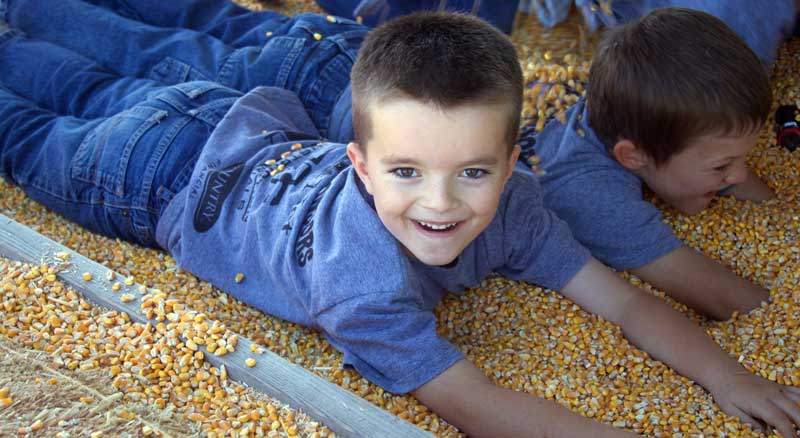 DPA Principal DeeAnn Williams exclaims the field trip to be one of the school’s favorite because it involved the student’s whole family.

“The whole family comes,” she said. “That’s all that counts.”

“The kids have so much fun out here, they love it,” Myndee Gray said. “They love, love, love the corn pit. The kids absolutely love that. It’s beautiful weather and it is so pretty out here.” 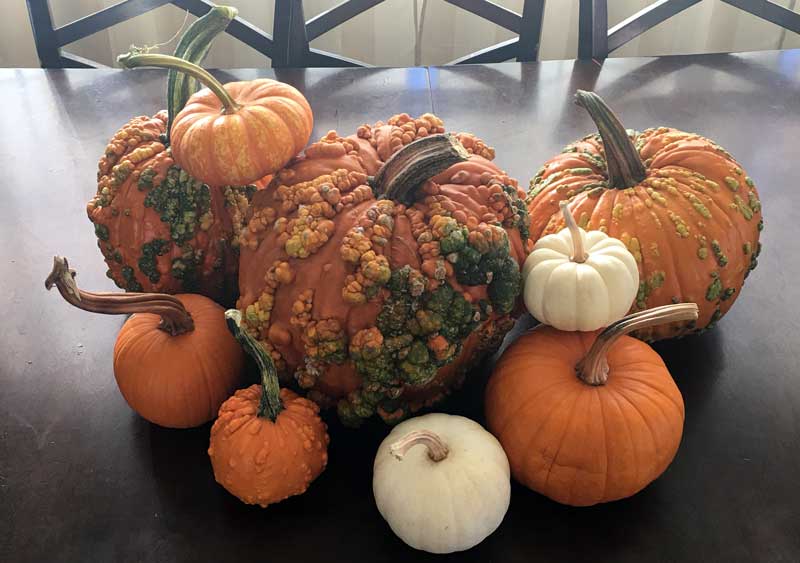 Jon Johnson Photo/Gila Valley Central: Here is a selection of pumpkins brought home by the author.

11:45 a.m. – After pictures on oversize chairs and goofy cutouts and on top of tractors, the group lines up to climb aboard the hayride, pulled by tractors. One by one they file up the stairs onto hay bales for a leisurely ride deep into the pumpkin patch.

Along the way, the various types of pumpkins are seen growing in vast rows. The students are giddy with excitement, along with some parents too. 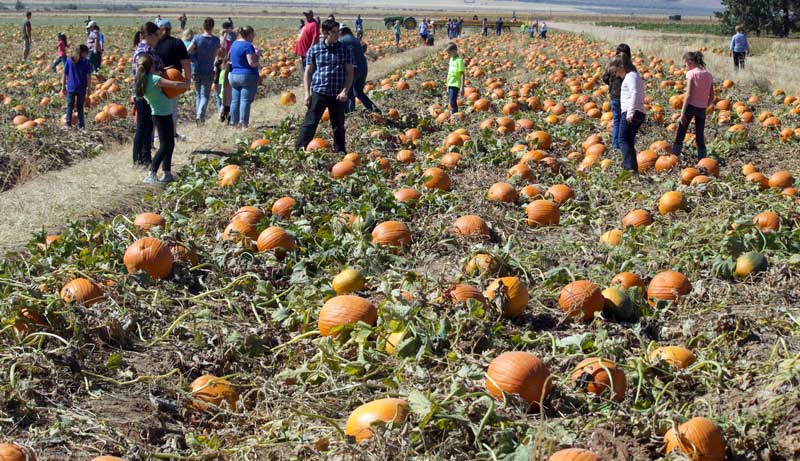 “I love Apple Annie’s,” Miquel McRae said. “It’s the kickoff to getting us into the Fall spirit. (We have come) every year for six years.” 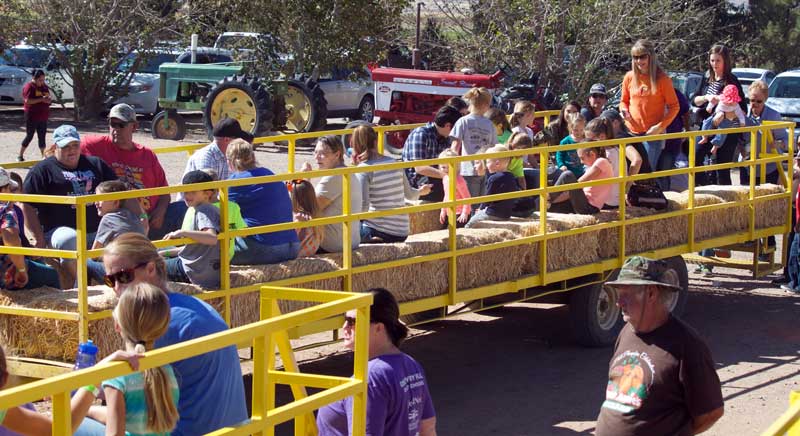 Jon Johnson Photo/Gila Valley Central: The group piles on the hayride for a trip to select their pumpkins.

11:55 a.m. – The hayrides stop at a large section of pumpkins and the students rush out to select their favorite style. There are warty pumpkins, white pumpkins, traditional, large and small. If a visitor decides to go to the patch on their own, the helpful staff offers a pumpkin barrow and some shears and invites those to wander the patch to find that special pumpkin or two to bring home. 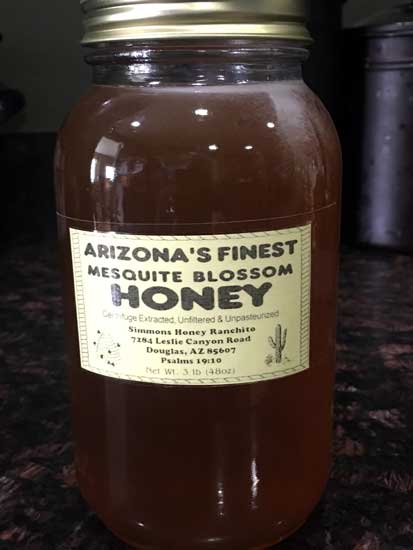 Third-graders Nehemiah Varume and Madison Logan picked out a couple of warty pumpkins to take home.

Apple Annie’s grows more than 40 acres of pumpkins every year with 25 – 30 different varieties. Pumpkins picked by the public range in price from $3 to $25 depending on the size and specialty pumpkins, such as Cinderella and Fairytale go for 69 cents per pound. There are also hundreds of pre-picked pumpkins of various varieties in various sized at a shop at the end of the tour to select from as well if one doesn’t see exactly what they are looking for out in the patch.

12:10 p.m. – Back on the hayride for the trip back to the parking lot. Upon arrival, pumpkins are placed in vehicles and the group assembles to learn some facts about the farm, before heading into the last stop: the renown corn maze.

12:45 p.m. – Readying to enter the maze, groups are given a sheet with questions that are paired with signs placed throughout the maze. The 20-acre corn maze is one of the largest in Arizona and is made differently every year. This year it is sports-themed with both the University of Arizona and Arizona State University being represented. 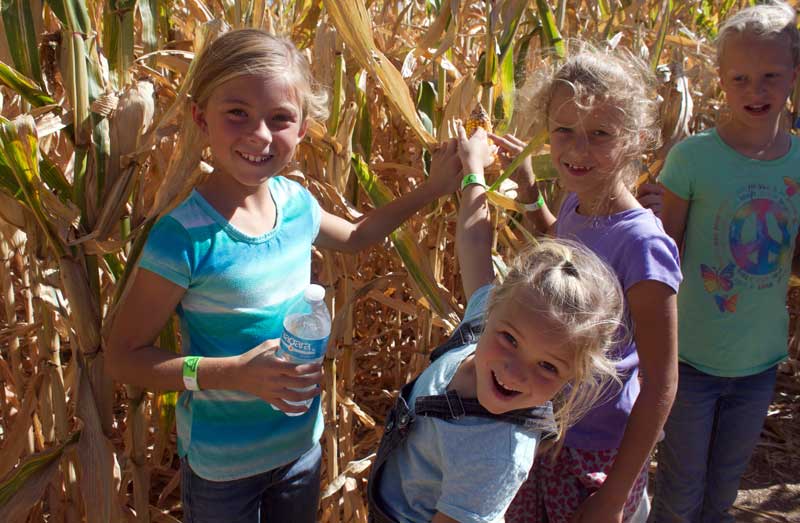 Jon Johnson Photo/Gila Valley Central: From left, Mia and Ella Ashby prepare to go into the maze with their cousins, Taylor and Page Ashby.

Hope you were paying attention at the last stop because that’s where all the answers come from and one must know the correct answer to go the correct way and not get lost.

“We love the maze,” Alliene Miller said. “I like everything. When we lived in Benson we came here every year. So, this has been our thing. It’s gotten better over the years . . . It’s a fun day.”

Thankfully, the maze is shortened to just a small portion for the elementary students and everyone makes it. 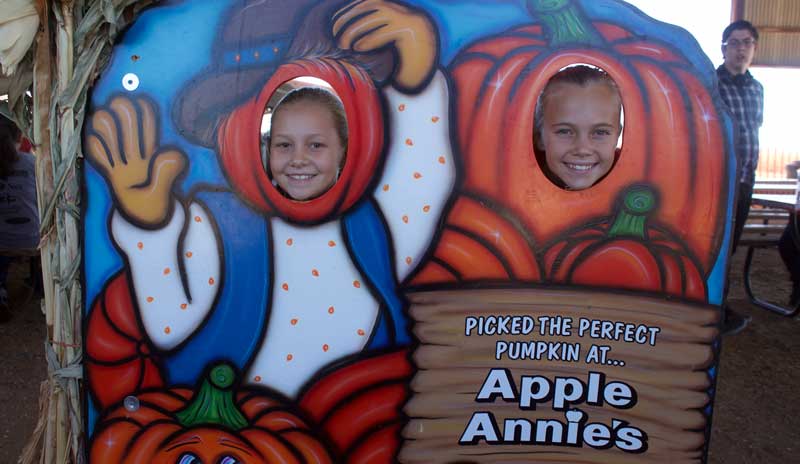 1:15 p.m. – Walking back from the maze the group meanders through the shop with the extra pumpkins and a large assortment of farm-fresh products available for sale, including salsas, honey, and bread. This writer can’t pass up on the natural honey in a mason jar (they even have one with a honeycomb inside) and apple bread. 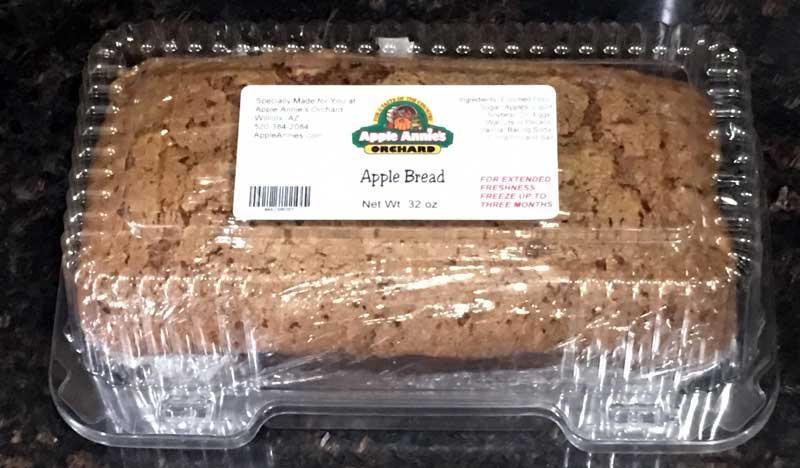 Jon Johnson Photo/Gila Valley Central: Another must from the excursion is some apple bread.

1:45 p.m. – All the pictures are taken, the pumpkins are stowed and the farm-fresh goodies are secured. As the convoy departs, some choose to head north and take the more scenic route through Highway 266, cutting over the Pinaleño Mountain Range. I, however, have a deadline. So, I choose to head south and back toward I-10 to speed on home.

All children 2 years and younger are free