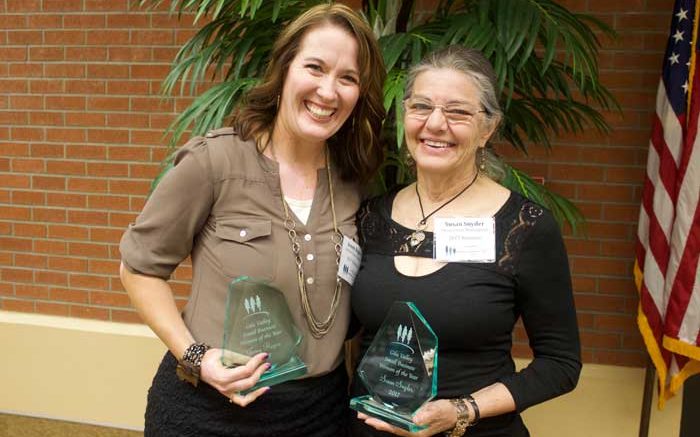 THATCHER – After a night of wonder acknowledging a record number of nominees for Gila Valley Small Business Woman of the Year, Charmaine Chidester of the EAC Small Business Development Center announced a surprise twist – not one but two women would leave with the honor.

Jenny Rogers danced away with the award for Graham County while Susan Snyder gave the hard sell to earn the award for Greenlee County. Each of them was awarded a trophy and a check for $1,000. The awards were presented at a dessert banquet in honor of all those nominated held at EAC’s Gherald L. Hoopes Jr. Activities Center on Thursday night. 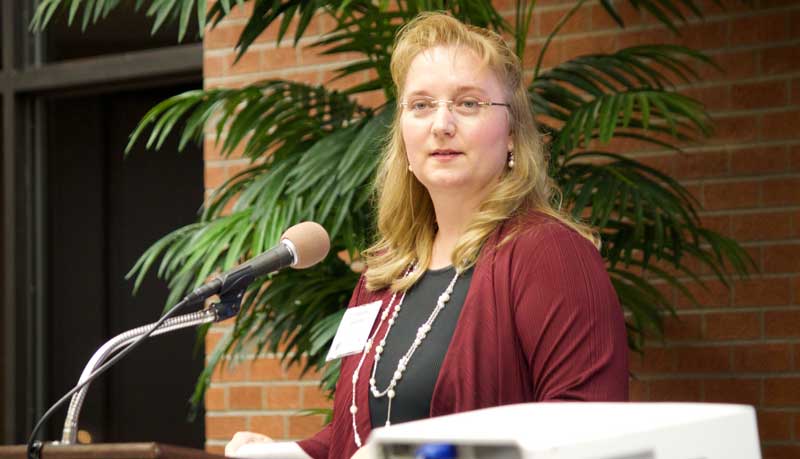 Jon Johnson Photo/Gila Valley Central: Charmaine Chidester, business manager with EAC’s SBDC and Gila Valley Small Business Woman of the Year committee member announced the twist of having a winner from both Graham and Greenlee counties. 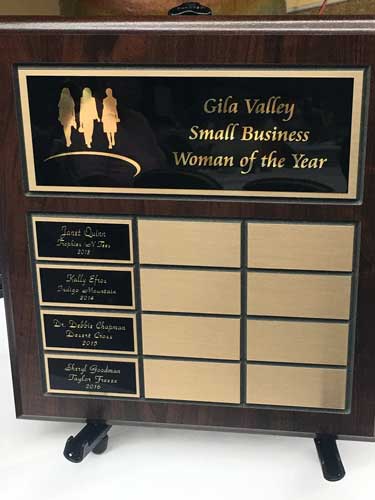 Jon Johnson Photo/Gila Valley Central: The question now is how do they address the winner’s name plaque?

For the past four years, only one woman has been chosen from applicants of both counties, but Chidester said after the award committee poured over all the nominees, they discussed how Greenlee County has unique opportunities and challenges that differ from Graham County and felt that with the differences it would be better to have a separate winner from each county. The committee agreed and said it would be great to offer that next year. After sharing the idea with a few people, however, one businesswoman anonymously donated $1,000 in prize money so there could be two winners.

Dr. Janice Lawhorn, EAC Dean of Curriculum & Instruction, introduced the winners and read a prepared statement about each of them. She said she was without words to describe the feeling she had while hearing all of the nominees’ accomplishments and was overjoyed at being present with them all.

“It is truly a humbling experience to sit in a room full of women (who) are absolutely, positively amazing,” she said.

Rogers has owned and operated the Safford Dance Academy for 20 years and employs 10 teachers, five assistant teachers, and five secretaries. They teach roughly 300 dancers, ages 3 to 20, in 10 different genres of dance. 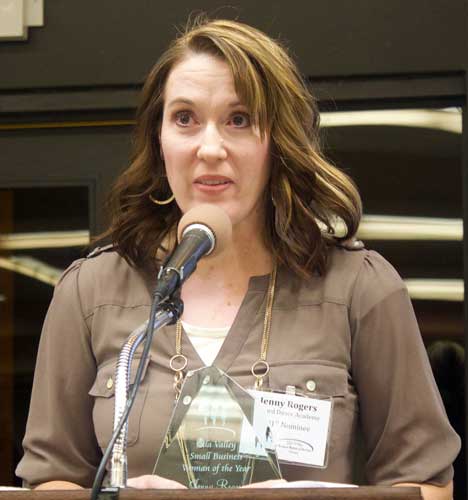 Her goals are to influence and inspire, increase the quality of dance education and to give her students experiences outside of the community. Some of the issues she has expressed through dance routines include the battle against cancer and bullying. She said watching her students grow up and return to assist with the business makes her heart swell with pride.

“I think one of the proudest moments I had in my business was when I realized that every one of my employees was a former student of mine,” Rogers said. “And to me, that really touched my heart because it meant what I was doing touched their hearts as well. That means a lot to me.”

Rogers told Gila Valley Central that she would have to poll her employees to see what improvements to the studio they should use her $1,000 prize winnings for but that it definitely would go right back into her business.

Snyder is the first winner from Greenlee County and has owned and operated Chase Creek Marketplace in Clifton for the past 14 years. The one-of-a-kind shop is a haven for artists of all sorts and sells a variety of hand-crafted art, including paintings, pottery, clothing, jewelry, weavings, salsa and more. 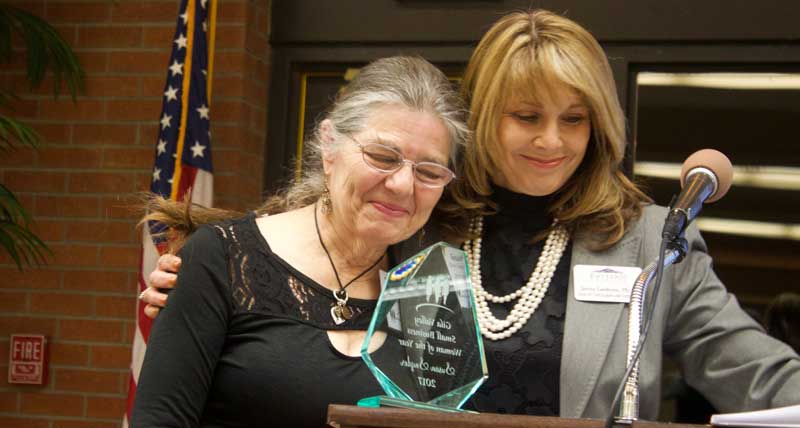 Snyder’s store is an anchor market for Chase Creek and she promotes Greenlee County and uses her business to educate tourists and newcomers about all there is to experience in Clifton.

“I viewed Chase Creek Marketplace from the very beginning as just I own the building and I have all these wonderful artist friends (who) have the things for sale,” Snyder said. “And the first thing I need to do tonight is (to) say thank you to my best friend Linda Fout, who came with me this evening. Linda grew up doing retail sales. I had never touched a cash register until I owned it in my own store. She has taught me what I needed to do to run the business, but it’s all the wonderful artists – and Linda is artist number one in my shop – (who) have contributed to the success of the business and the success of the community and the economic growth we have seen in Greenlee over the many years that I have been there.” 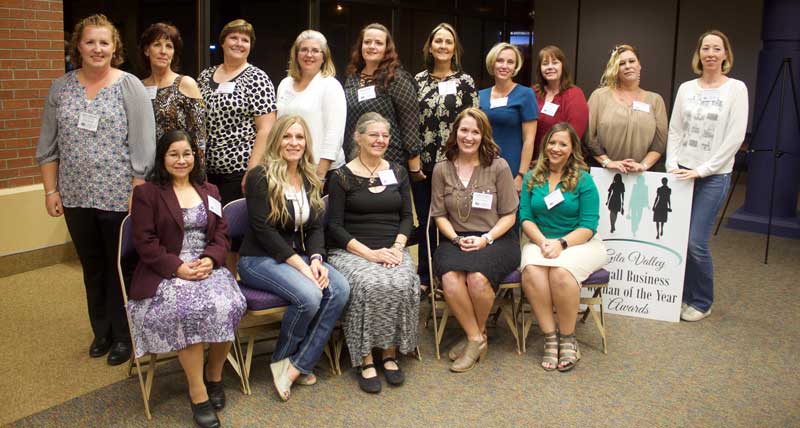 Jon Johnson Photo/Gila Valley Central: Pictured are the nominees who attended the dessert banquet for the 2017 Gila Valley Small Business Woman of the Year Award.

In her nomination acceptance letter, Synder said she opened her shop to have a place where her friends could sell their creations instead of having to wait for a weekend event to do so. The store has hosted 229 artists over the years with 75 currently active.

Snyder also expressed her appreciation to the committee for splitting up the counties and said a Greenlee nomination had come in second each time the previous four years. She plans on using her $1,000 prize money to provide waterproofing to her shop where the masonry of her historic building is lacking due to the eroded mortar. 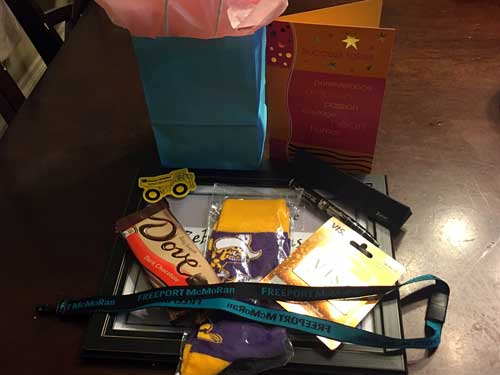 Jon Johnson Photo/Gila Valley Central: Pictured is the contents of the swag bag given out to each nominee.

All of the nominees were honored at the event and were given a certificate and a swag bag after their accomplishments were read by a committee member. The swag bag included a $25 gift card, lanyard, fancy pen from Freeport McMoRan Inc., a chocolate bar, a pair of sweet EAC socks, and a card signed by the committee members.

Chidester said the one thing in common all the nominees had was that each of them interacts with their community through their businesses and are involved in a variety of areas that some may never have thought they would be involved.

“I just think it’s an inspiration to realize what these women do in their businesses,” Chidester said.

She added that it can be a lonely place being an entrepreneur and that the award program allows the women business owners to interact and find out that there are more women out there like themselves.

“Having an award program like this where women realize how many other people out there like them there are, I think that’s really uplifting,” Chidester said.

Gila Valley Central congratulates all of the 2017 Gila Valley Small Business Woman of the Year nominations: