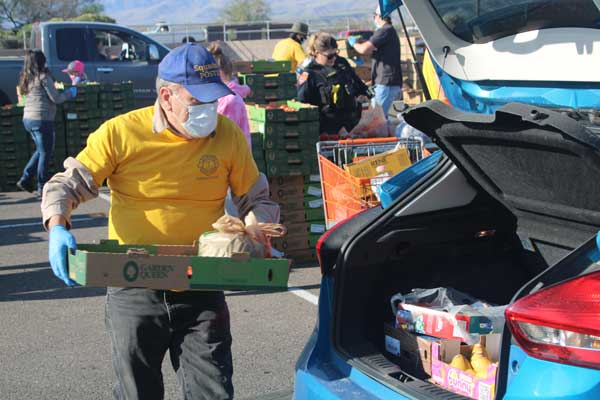 David Bell Photo/Gila Valley Central. Dennis Sawyer, with Safford Lions Club, helps load about 70 pounds of fresh produce into the trunk of a car during a 2020 Borderlands Produce Distribution by the Lions Club, in the Home Depot parking lot.

THATCHER – If a true stay-at-home order comes down from the governor’s office, Gila Valley residents will have plenty of fresh food for a little while.

Southeastern Arizona Community Unique Services distributed commodities to more than 200 seniors Wednesday and Thursday, while the Safford Lions Club distributed to residents of all ages more than 20,000 pounds of fresh produce in 90 minutes Saturday.

“Looking at the situation at the grocery stores and the other food pantries, we expected it to move fast,” said Horatio Skeete, coordinator of the monthly Borderland produce distribution for the Lions Club.

Drivers never left their vehicles and each volunteer was gloved and masked.

It was the same drive-through situation Wednesday and Thursday at the Graham County Senior Center, when SEACUS conducted its distribution. Each month seniors who register can receive commodities from the Food Bank of Southern Arizona – which includes fruits and vegetables as well as eggs, bread, peanut butter and (this month) pork loin – which was the Wednesday distribution. Thursday was the result of an unexpected call.

“The Food Bank called us this week and said they were bringing down a small order for somebody else, and they wanted to know if they could bring a pallet to us, if we would be willing to distribute it. And we said yes,” said Royce Hunt-Bell, executive director of SEACUS. “It was totally unplanned and something we wouldn’t normally do, but they asked us and my crew said, ‘Yes.’ And that was Thursday.”

Response was so great to the extra day of distribution, Hunt-Bell said that Safford Police had to be on scene to direct traffic. More than 200 vehicles were served over the two days.

Editor’s note: Royce Hunt-Bell is the wife of David Bell, and David Bell is a member of the Safford Lions Club.