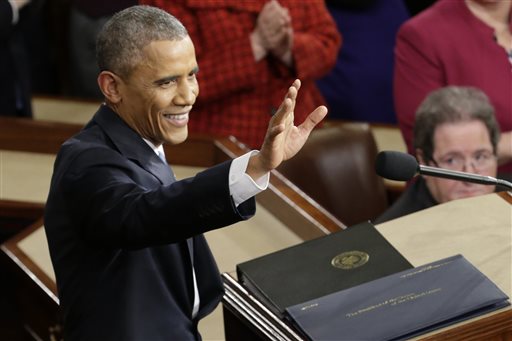 FILE - In this Jan. 20, 2015, file photo, President Barack Obama waves before giving his State of the Union address before a joint session of Congress on Capitol Hill in Washington. Obama will deliver his final State of the Union address Tuesday, Jan. 12, 2016, to a nation with a burgeoning job market, flat wages and two things that to the president's dismay are rising: global temperatures and Americans' concerns about terrorism. (AP Photo/Pablo Martinez Monsivais, File)

WASHINGTON (AP) — President Barack Obama delivers his final State of the Union address on Tuesday night to a nation whose economy is far sturdier than it was when he took office in 2009.

Yet as 2016 begins, the stout job market is accompanied by tepid economic growth and stubbornly flat wages. More broadly, two things are on the rise, to the president’s dismay: global temperatures and Americans’ concerns about terrorism.

A snapshot of the country:

Friday’s December jobs report capped a strong year in which employers added 2.65 million positions. That made 2015 the second best year since 1999 for job gains, exceeded only in 2014.

For a third straight month, the unemployment rate was 5 percent. That’s the lowest three-month dip in eight years and half the 10 percent joblessness registered in October 2009, as the country began climbing out of the recession.

But average hourly pay seems stuck, sliding one cent last month to $25.24. That left the growth of average pay at 2.5 percent last year, below the 3.5 percent economists consider healthy.

THE ECONOMY, FROM OTHER ANGLES

For Wall Street, 2015 was a roller coaster. Record highs in spring were followed by an abrupt summertime swoon, prompted by worries about the strong dollar’s impact on exports, China’s slowing economy and sagging oil prices.

By year’s end, the Dow Jones industrial average had faded by 2.2 percent, its first down year since 2008. And it began 2016 with steep declines fueled by continued China worries.

Through November, the most recent figure, inflation grew by 0.4 percent for the past 12 months. That minuscule rise was well below the annual 2 percent increase the Federal Reserve prefers.

Oil prices slumped to their lowest levels since 2004. That meant bargains at the pump, where last week’s U.S. average for a gallon of regular gasoline was $2.03, according to the federal Energy Information Administration.

That was down slightly from a year earlier. A typical household saved $660 on its gasoline costs compared with 2014, the agency said.

Though the Federal Reserve raised a key interest rate for the first time in seven years, homebuyers’ mortgage interest rates remained at a relatively low 3.97 percent last week. That’s up slightly from a year earlier but well south of the historic 6 percent average.

The administration says that with the sign-up deadline still three weeks away, 11.3 million people have enrolled for 2016 coverage under Obama’s 2010 health care overhaul, similar to last year’s enrollments.

Though that law has helped decrease the number of uninsured people in the United States, progress may have paused. The Gallup-Healthways Well-Being Index, an independent survey, says 11.9 percent of adults remained without coverage as 2015 ended, about the same number that began the year uninsured.

People remain concerned about rising costs of prescription drugs. Many face employer-provided coverage with growing premiums, deductibles and other out-of-pocket costs. The government estimated that the national health care bill grew by 5.3 percent in 2014, a turnabout from five previous years of unusually slow growth.

There was a growing threat from the Islamic State group and escalating efforts by the U.S. to combat; Republicans say the Obama administration hasn’t done enough.

A campaign ad by Republican presidential hopeful Donald Trump highlights his call to temporarily ban Muslims from entering the country, juxtaposed with images of the San Bernardino shooters and explosions. Obama and Democratic presidential front-runner Hillary Clinton have criticized Republicans for what they say is demonizing Muslims and helping IS attract recruits.

The FBI reported conducting more background checks on gun buyers in December than in any month since the system began in 1988. It processed over 3.3 million checks in December and 23.1 million in 2015, its busiest year ever.

That could be in reaction to San Bernardino and Paris.

THE HEAT IS ON

More than 200 nations reached agreement last month to try curbing global warming by restricting the use of fossil fuels, which emit heat-trapping gases. It was an Obama priority.

Yet the National Oceanic and Atmospheric Administration said last week that 2015 was the second warmest and third wettest year in 121 years of record-keeping for the lower 48 states, in part thanks to the El Ninonatural warming of the Pacific Ocean that affects climate worldwide. NOAA expects figures later this month to show that last year was the hottest ever recorded globally.