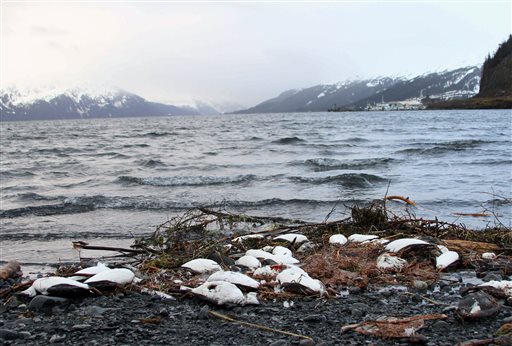 In this Thursday, Jan. 7, 2016 photo, dead common murres lie washed up on a rocky beach in Whittier, Alaska. Federal scientists in Alaska are looking for the cause of a massive die-off of one of the Arctics most abundant seabirds, the common murre. (AP Photo/Mark Thiessen)

ANCHORAGE, Alaska (AP) — Seabird biologist David Irons drove recently to the Prince William Sound community of Whittier to check on a friend’s boat and spotted white blobs along the tide line of the rocky Alaska beach. He thought they were patches of snow.

A closer look revealed that the white patches were emaciated common murres, one of North America’s most abundant seabirds, washed ashore after apparently starving to death.

“It was pretty horrifying,” Irons said. “The live ones standing along the dead ones were even worse.”

Murre die-offs have occurred in previous winters but not in the numbers Alaska is seeing. Federal researchers won’t estimate the number, and are trying to gauge the scope and cause of the die-off while acknowledging there’s little they can do.

Scientists say the die-offs could be a sign of ecosystem changes that have reduced the numbers of the forage fish that murres depend upon. Warmer water surface temperatures, possibly due to global warming or theEl Nino weather pattern, may have affected murre prey, including herring, capelin and juvenile pollock.

There are about 2.8 million breeding common murres in 230 Alaska colonies, part of a worldwide population of 13 to 20.7 million birds. Awkward on land, their short, powerful wings make them extraordinary swimmers, “flying” beneath the surface as deep as 600 feet to hunt for fish.

An estimated 8,000 of the black and white birds were found dead on the Whittier beach, said John Piatt, research wildlife biologist at the U.S. Geological Survey’s Alaska Science Center.

“That’s unprecedented, that sheer number in one location is off the charts,” he said.

Winter storms can affect murres’ ability to hunt. An estimated 185,000 common murres died in the Exxon Valdez oil spill in 1989. Researchers estimate that 120,000 died in a 1993 winter event. But this year is different.

“The length of time we’ve been seeing dead birds, and the geographic scope, is much greater than before in other die-off events,” said Kathy Kuletz, a biologist for the U.S. Fish and Wildlife Service. “We’re looking at many times that. So possibly a good chunk of the population.”

In 2008, Irons was lead author on a research paper that correlated natural die-offs to climate change and rising ocean temperatures. Using data from murre colonies around the circumpolar north, researchers found murres died in years when ocean surface temperature water increased by just a few degrees.

Murre prey such as capelin, a forage fish in the smelt family, live in a narrow band of cool water, said Irons, who retired last year after 36 years with the Fish and Wildlife Service in Alaska and California.

“If the water (temperature) goes above that threshold, they’re out of there,” Irons said. “They either die or they move.”

No one monitors forage fish off Alaska, Irons said. “So when they’re gone, no one has any information on them to show that they’re gone, except birds are showing us they’re gone,” he said.

Murres high energy requirement means they have to eat prey matching 10 to 30 percent of their body mass daily. They look for fish in dense schools. “If you don’t have these dense schools of prey, they don’t seem to do very well,” Irons said.

Water temperatures in 2015 were above average and biologists detected signs of trouble. Murres usually found on the outer continental shelf began to show up near shore, including a Juneau boat harbor where they competed with sea lions for herring.

Each spring, murres nest shoulder to shoulder on cliffs or slopes. Females synchronize laying single light bulb-shaped eggs especially suited for a ledge: if they roll, they roll in a circle instead of off the precipice.

Many females in 2015, however, were too weak to breed, Kuletz said.

Finding murre carcasses in summer is unusual but small numbers of birds were reported in Kodiak, the Alaska Peninsula and other locations. Deaths were reported along the Pacific coast as far south as California.

When autumn arrived, inland Alaskans spotted what looked like skinny penguins walking on roadways. By December, murres had been spotted in near Fairbanks, roughly 360 miles from the ocean. Some were turned over to bird rehabilitation facilities.

Strong North Pacific winter storms in December that prevented weakened birds from foraging may have been the final blow.

A trickle of rescued birds turned into a flood. Anchorage’s Bird Learning and Treatment Center received 160 stranded murres in the last three months of 2015. Another 230 murres arrived in the first five days of 2016.

The USGS National Wildlife Health Laboratory in Madison, Wisconsin, has examined about 100 carcasses and detected no parasites or disease that may have contributed to murres not eating, said wildlife disease specialist Barbara Bodenstein.

If the die-off is tied to low numbers of forage fish brought on by a warming ocean, the rest of 2016 does not bode well for murres, Piatt said.

The phenomenon known as the Pacific Blob, a mass of warm water in the North Pacific, has cooled but is still around. Oceanographers predict for 2016 an extreme El Nino, the natural warming of the central Pacific that changes weather worldwide.

“What’s that going to do on top of the warming effect we’ve had in the last six months to a year?” Piatt said. “I’m asking because I don’t know.”