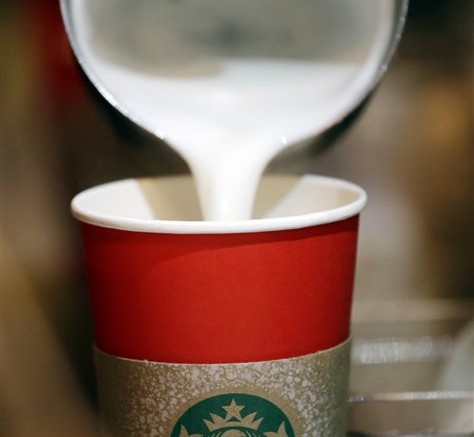 A barista pours steamed milk into a red paper cup while making an espresso drink at a Starbucks coffee shop in the Pike Place Market, Tuesday, Nov. 10, 2015, in Seattle. It's as red as Santa's suit, a poinsettia blossom or a loud Christmas sweater. Yet Starbucks' minimalist new holiday coffee cup has set off complaints that the chain is making war on Christmas. (AP Photo/Elaine Thompson)

NEW YORK (AP) — It’s as red as Santa’s suit, a poinsettia or your neighbor’s ugly Christmas sweater. Yet Starbucks’ stark new holiday coffee cup has set off complaints that the chain is making war on Christmas.

The outcry — which gained in intensity after Donald Trump suggested boycotting the coffee chain — illustrates the fine line companies must walk during the all-important holiday season: They want to stand out from their competitors, but not go so far as to offend or unsettle.

“The challenge is that the holiday language is same for everything,” said Allen Adamson, founder of BrandSimple Consulting. “Everyone does it, so how do you do it in a way that’s distinctive? If you push too far with distinctiveness, you might end up ruffling feathers.”

Since 1997, Starbucks has offered holiday drinks in a festive red cup, adorned with such things as Christmas ornaments, reindeer and snowflakes. This year’s design is minimalist: vivid red, with nothing but the familiar green Starbucks logo.

Starbucks executives said they wanted to embrace “simplicity and quietness” and show that the coffee shops are a “sanctuary” during the holidays. The company also reminded customers that it is selling its Christmas Blend of coffee as usual this year.

But some religious conservatives saw the new cup as an affront to tradition and yet another example of what some have called the “war on Christmas” — the taking of religion out of the Yuletide season by doing such things as greeting customers with “Happy holidays” instead of “Merry Christmas.”

On Twitter, where the topic became a sensation, some people were upset over the cup, while others said they didn’t understand what the big deal was.

Trump weighed in on Monday by saying, “Maybe we should boycott Starbucks.” He added: “If I become president, we’re all going to be saying, ‘Merry Christmas’ again. That I can tell you.”

And a group called Faith Driven Consumer urged people to go to Dunkin’ Donuts or Krispy Kreme instead.

At a Starbucks in downtown Los Angeles that was decked out with decorations touting the Christmas Blend, customer Ray Velasco said he doesn’t give much thought to how companies market during the holidays, especially when it’s barely November.

“There’s so much stuff going on in the world, I just can’t pay attention to every controversy,” he said.

Lara Reynolds sipped the Christmas Blend and dismissed the social-media furor with a wave: “It’s ridiculous. I’ve been trying to ignore it.”

Kit Yarrow, a professor of psychology and marketing at Golden Gate University in San Francisco, said some people seized on the cup for the same reason many Americans have been captivated by Trump’s “anti-PC” stance.

“A lot of people are really just constantly on the lookout for some vehicle to express anger and dissatisfaction, and this is the vehicle du jour,” she said.

In part, the outcry has to do with the unexpectedly plain design, which proved to be too much change for some people, said marketing consultant Laura Ries.

“Over the years, they had some whimsical holiday designs, and that’s what people got accustomed to seeing,” she said. “They chose a modernistic, blank, stark look to the cup that was such a departure it got people anxious.”

She likened the flap to a similarly stark redesign by Tropicana in 2009, when the company gave its leafy orange packaging a more abstract look. The change made Tropicana juice almost unrecognizable, sales plummeted, and Tropicana went back to the original design.

It’s not the first time Starbucks has caused a flap with its cup.

In March, Starbucks asked baristas to write “Race Together” on customers’ cups to spark conversation about race. But many didn’t want a debate with their brew, and Starbucks abandoned the campaign quickly.

“People aren’t looking for that cup to be this huge billboard,” Ries said. “They just want to enjoy their coffee.”