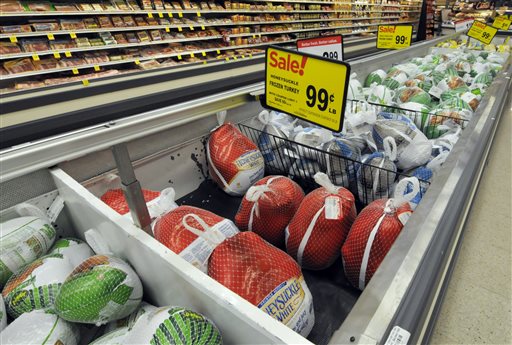 In this Nov. 5, 2015, photo, Thanksgiving turkeys are shown at a Cub Foods store in Bloomington, Minn. Richard Volpe, a retail food price economist formerly with the U.S. Department of Agriculture, said one of the most effective things supermarkets can do to lure holiday shoppers is to advertise cheap turkeys whose prices tend to be lowest around the holidays when demand is highest. (AP Photo/Jim Mone)

MINNEAPOLIS (AP) — Bird flu took a bite out of the turkey supply. Heavy rain washed out the pumpkin crop. Yet Thanksgiving groceries likely won’t cost Americans much more than last year, and nobody should have to miss gobbling down their favorite holiday foods.

The holiday season perennially generates stories about some items being in short supply or dramatically pricier, but markets have a way of balancing themselves out, particularly around this meal.

So even though bird flu wiped out 8 million turkeys — driving production down and wholesale prices up — you’re in no danger missing out. These birds don’t play by the usual rules of supply and demand. That’s because one of the most effective things grocers can do to lure holiday shoppers is offer cheap turkeys, even selling them at a loss, says Richard Volpe, a professor at Cal Poly in San Luis Obispo, California, and former retail food price economist with the U.S. Department of Agriculture.

Further shielding consumers is that most of the birds destined to grace Thanksgiving tables this year already were born, slaughtered and frozen before the outbreak, says Thomas Elam, president of FarmEcon LLC, a consultant to the poultry industry. Frozen whole turkeys make up as much as three-quarters of the Thanksgiving market.

In fact, retail prices for frozen birds have been softening, according to a USDA weekly supermarket survey. Frozen hens averaged $1.08 per pound as of Nov. 6, down from $1.69 three weeks earlier, though up from 89 cents a pound a year ago.

The exception? Fresh turkeys. Most birds that will be sold fresh were hatched after the outbreak passed, and wholesale prices have been rising. USDA figures show that fresh whole hens averaged $1.60 a pound on the spot market at the start of November, compared with $1.36 a year ago. Supply also may be tight — though hardly scarce — so Elam suggests locking in your order early.

It also helps that retailers had plenty of time to compensate. In fact, Wal-Mart expects to have more turkeys than ever before, and prices actually will be lower than last year, says spokesman John Forrest Ales. For example, a 16-pound premium frozen Butterball will cost about 64 cents less than last Thanksgiving.

Record rains early in the growing season did slash pie-pumpkin yields by about 50 percent in Illinois, by far the country’s top producer. But market leader Libby’s still expects canned pumpkin supplies to last through Thanksgiving and the shortage probably won’t be felt until after the holiday baking season, says company spokeswoman Roz O’Hearn. And how often have you hankered for pumpkin pie come Super Bowl?

Wal-Mart certainly isn’t worried. The company sells two pumpkin pies per second in November and won’t run out, Ales says. They also are cheaper this year, down from $3.98 last year to $3.48.

The price of eggs has jumped around 50 percent since May to about $2.97 per dozen — but Thanksgiving is hardly an egg-centric holiday. Leave the egg anxiety for Easter. The butter for all those mashed potatoes and pie crusts, on the other hand, has dropped to around $3.08 a pound compared with $3.82 a year ago. Milk is down to $2.22 a gallon compared with $3.78 last year.

If the season has you hankering for some eggnog, you will pay a bit more for that. The USDA says it is running about $2.55 a quart this year, up from $2.28 last year.

The rest of the meal mostly comes down to produce, usually the least expensive component. While the California drought has pushed vegetable and fruit prices higher, the picture at the supermarket is mixed.

Retail prices are up for russet potatoes (24 percent); spaghetti, acorn and butternut squashes (about 17 percent); and sweet potatoes (10 percent); but cranberry prices are down (14 percent), according to the USDA. And some retailers still are able to find and pass along savings. Wal-Mart is selling asparagus for about 9 percent less than last year and 3-pound bags of sweet potatoes are going for 85 cents less.

The tally? The average cost of a Thanksgiving dinner for 10 people has hovered around $49 since 2011, and it tends to track closely with the consumer price index for food eaten at home, according to the American Farm Bureau Federation. The CPI for supermarket food as of September was just 0.8 percent higher than a year earlier.

Will you be traveling to belly up to the big meal? There’s good news on that front, too.

And air ticket sales are basically flat compared to last year, with a mere 0.3 percent or 69-cent average increase, according to the Airlines Reporting Corp., which processes ticket transactions for airlines and travel agencies.

This story has been corrected to show the price of a Butterball turkey sold at Wal-Mart will cost 64 cents less overall, not per pound.