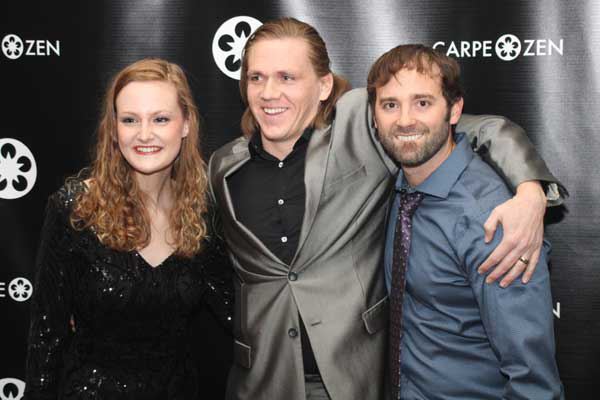 The stars of the film "Ace of Hearts," from left, Madelyn Waite, Adam Moore and Joseph Carpenter, pose for photos before the film's premiere. - David Bell Photo/Gila Valley Central

SAFFORD — It was a taste of Hollywood in Safford on Saturday.

The movie “Ace of Hearts, filmed in the Gila Valley, had its premiere at the David M. Player Center for the Arts, with the film’s stars and creators in attendance.

“It was interesting to see people’s reaction; where people laugh (and) where people don’t laugh,” said Jacob Lauritzen, the film’s writer and director, who added that feedback from the audience was positive.

The film focuses on private investigator brothers dealing with the mysterious death of their father, a police officer killed in the line of duty, intertwined with a domestic violence case.

The film stars Joseph Carpenter and Adam Moore as the brothers, Madelyne Waite as their friend, and Michael Ochotorena as their father’s former partner.

Ochotorena has appeared in numerous film and TV projects, including the “Beauty and the Beast” TV series and the film “El Coyote.”

“Jacob has heard about me and reached out to me and pitched me the story,” Ochotorena said. “I heard the story, I saw his enthusiasm (and) I saw he had a love for this film that he had brewing for years and years. I vowed I was going to use my little bit of star power and my connections to help him out as best I could.”

In addition to his performance and helping bring in other established actors, Ochotorena committed his production company, Burning Bulb Productions, to help distribute the film.

The film is now being circulated on the Film Festival circuit, and Blu-Ray copies are available for purchase at the Graham County Chamber of Commerce building in Safford.