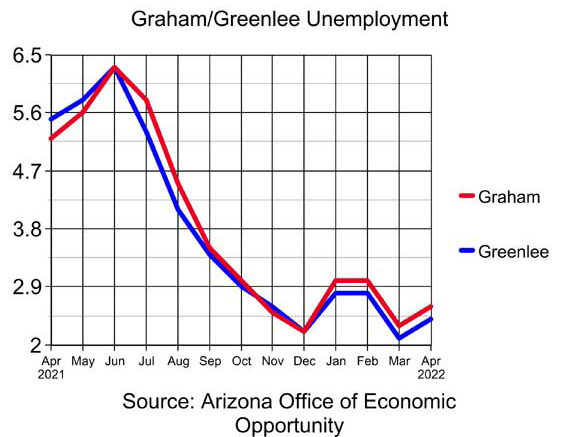 PHOENIX —Unemployment claims rose slightly in Graham and Greenlee counties, but Arizona’s two eastern counties continue to have the lowest unemployment in the state.

That’s according to data released Thursday by the Arizona Commerce Authority.

The jobless rate in Greenlee County rose three-tenths of a point to 2.4 percent in April, to give Greenlee County the lowest unemployment in the state for the fifth month in a row and the 14th time in the last 16 months.

Nearby Cochise County increased four-tenths of a percentage point, from 3 percent in March to 3.4 percent in April.

Statewide, the seasonally-adjusted unemployment rate fell one-tenth of a point in April to 3.2 percent; remaining well below the same time last year, when Arizona’s unemployment rate was at 5.6 percent. The national rate remained flat at 3.6 percent.