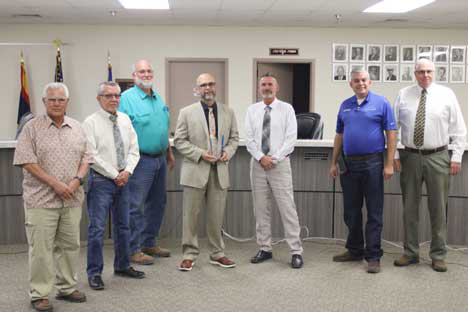 David Bell Photo/Gila Valley Central. Horatio Skeete, center, is thanks for his years of service as city manager by the Safford City Council during last MOnday's meeting. Skeete retired from the position, effective Thursday.

SAFFORD — At a special meeting Wednesday, the Safford City Council agreed to name assistant City Manager John Cassella the new city manager, taking over from Horatio Skeete, who retired as of Thursday.

Casella said he hopes to build on Skeete’s success in managing the city as well ensuring the City Council’s vision for the city is carried out.

“Before I lay out any master plans or anything, I want to sit down with the council in one-on-one sessions and get some of their thoughts,” Cassella said. “Again, I think part of what I want to do is give them what they’re looking for and take the community in the directions they want to go in.”

At the beginning of the year, Skeete announced his retirement effective in June. He was presented by the City Council with a token of appreciation at last Monday’s regular meeting.

“After retirement, I’m going to probably do a little bit of consulting for government services, and spend some time back in St. Vincent with my mom,” Skeete said. “Thirty-five years ago, when I left, I promised her I’d come back. And she said, ‘Yeah, sure.’ So I’m going to prove that I am going to come back.”

Skeete previously agreed to a short-term consulting contract to help the City Council select and transition to a new city manager. He said he anticipates assisting the city for about one month; however, the contract would allow Skeete and the city to continue working together through October if needed.