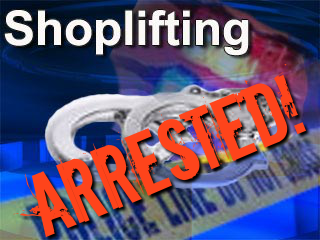 SAFFORD – A man was arrested for shoplifting and possession of drug paraphernalia on Friday.

After receiving the call from dispatch that there was a male Hispanic with sunglasses that had recently shoplifted at Thriftee Food and Drug in Safford, a responding officer spotted a man matching the description crossing the road. Because of traffic, the officer couldn’t turn around. However, he radioed other units to alert them of the location of the subject who matched the description.

Another officer made contact with the subject. At this, the subject, who was later identified as William, began calling for help. The responding officer said that William was acting as if he was under the influence of an illegal substance.

The Thriftee Food and Drug manager arrived at the scene and identified William as the man who shoplifted from the store. When later details emerged, William apparently asked a Thriftee’s cashier for a pack of Marlboro Black 100s. William took a soda and a blue lighter, as well as the cigarettes and told the cashier to pay for the items before he ran out of the store. The total amount of the items that William is known to have taken rang up to $12.14.

Officers later found a marijuana cigarette in William’s possession. William was charged with shoplifting and for the possession of paraphernalia.