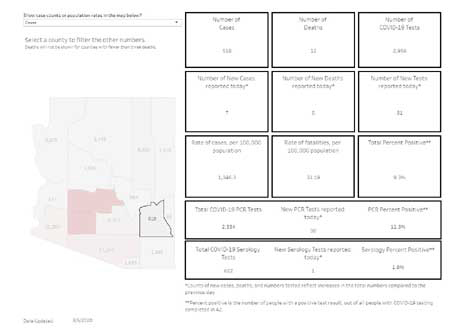 SAFFORD — There are seven new COVID-19 cases in Graham County.

Graham County announced the new cases Wednesday evening. That brings the county’s total to 518, with 370 active, 136 recovered and 12 deaths.

Graham County has an infection rate of 17.71 percent; however, Health Department officials said that the rate may appear high due to the lack of tests available and only those who are symptomatic are being tested.

The mortality rate for those who have tested positive in Graham County is 2.32 percent.

The Peridot District has seen the greatest number of cases, with 186 positives and two deaths, while Bylas has recorded 123 cases.

There were no new cases in Greenlee County Wednesday, keeping that county’s total at 57. Sixteen of the cases remain active, 39 have recovered and there have been two deaths.